I warn ya, this one is all over the place, folks!

TD was in charge of the holiday cards this year.  And, he did an awesome job that left little doubt about who designed it. TD may have abandoned his former heterosexual life partner, Albert Pujols; but, the dude still loves him some Cardinals. And yes, I’m pretty sure he actually purchased the image.  Right TD?  Right?

Opting for the popular flat card version, TD even ventured into the holiday letter genre.  Hell really has frozen over. I motion that TD is in charge of holiday cards going forward.  All in favor?

When all members of your immediate family live out-of-state, the holidays are generally all-or-nothing.  And, because we were lucky enough to spend time with both families in the last six months, this was a “nothing” year.  Which means we were left to our own devices.  Said devices resulted in the following.

Sometimes, good intentions go horribly,  wrong.  See, doing a Christmas tree in our house always presents a challenge.  We have one of those typical South Bay/Beach Cities “tall and skinny” townhouses.  So, while the tree would look best in the dining/sitting room on the first floor, we spend the vast majority of our “down-time” in the third floor loft (where there isn’t room for a tree).  The last couple of years I  bought and subsequently killed (not on purpose) rosemary bushes meant to serve as tree proxies.  Since I’m definitely anti-herb violence,  this year, I bought what I thought would be a really cool spirally-copper-tree deal.

For years I’ve been collecting hand-glown glass ball ornaments from an artist who sells (his? her?) work at a little gallery in Bozeman Montana called Altitude.  Some were given as gifts and others TD and I collected on our trips to Montana.  When it became clear that I’d probably never have enough balls to decorate a whole tree, I took a class in glass blowing and made some of my own (mine aren’t even in the same league…in fact, they aren’t even playing the same sport as the professionally made ones…mine aren’t even really round).  In addition to giving TD hours of comedic material about his wife, balls, and blowing,  the results also help fill-out the collection.  Anyhow, on their own, the glass balls displayed on the copper spiral looked really nice.  But then, I added lights.  And of course, Penelope, the peacock tree topper had to be added along with a scarf I picked up in Lijiang China as the tree skirt.  The result: Liberace called and wants his Christmas tree back.  TD and I even made up a song for it.

Device #2: A shot for Santa

We’re just those kind of people.  And, well, we may or may not have been drinking martinis on Christmas Eve.  Obviously Santa needed it because all we found Christmas morning is what you see in the photo.

Yes, I mean ceremonial.  Not traditional.  To be worn only on Christmas morning as part of the hallowed act of opening gifts.

Ceremonial PJs and a tacky tree create optimal conditions for a Christmas donut or two.

Not pictured here, but, despite what the critics are saying, TD and I agree that the second one was a particularly enjoyable mid-Christmas afternoon break.  Of course, Jude Law and Robert Downey Jr. could be in a remake of Gigli and I’d enjoy it.  What?

Here is the short of it.  We had dinner reservations at a fairly decent seafood/chop house.  We waited very patiently for 20 minutes after being seated with nary a drink order, while wait staff, bussers and probably a manager or two walked by the table several times.  Neither one of us were really in the mood to deal with it, so we walked.

Turning up on our street we noticed that a certain Mexican restaurant of dubious distinction happened to be open.  Now, we’ve lived in our neighborhood for five years, have eaten there twice. Our conclusion was that it’s got to be a front for some sort of illegal activity because it’s always packed but the food is crap.  However, very recently not one (hi JP!) but two people explained that you don’t really go there to eat.  You go there for the margaritas…sort of like El Coyote on Beverly.  We interpreted the confluence of this new information with the fact that it was actually abierto on Christmas night and enjoyed a fantastic (well, at least it was fantastic after a couple of drinks) meal with an awesome waiter.

While this isn’t what Christmas looks like for us every year, all in all, not too shabby.

Oh…and what did I get you for the holidays you ask? I updated the  INDEX!

This recipe has been haunting me since I bought Dorie Greenspan’s Baking, from my home to yours.  You see, it graces the book’s cover.  And so, every time I pull out the volume, there is it, daring me to find an excuse to make it.  And so, I did, and I did.

Not really one of those cakes you can throw together on a whim, what this recipe calls for in patience makes up for in specialness.  Chocolate-studded devil’s food cake surrounded in layers of pillowy, sticky marshmallow fluff.

I have to admit, that’s all you are going to get in the photo department.  I made this cake the week of Thanksgiving for company and because of all the other plates I happened to be spinning at the time, made the cake late one night and then the frosting the next night.  And we all know about my kitchen in lighting.

But, you’ll have to trust me when I tell you how much fun the frosting is to make and what a delight it was to work with in decorating.  One piece of advice: read through the entire recipe a couple of times before diving in.  It took me a couple of passes to actually conceptualize where Ms. Greenspan was going with the recipe.

adapted ever so slightly from Baking from my kitchen to yours, Dorie Greenspan

Because of how soft this frosting is, left-over cake (as if) should be stored in the fridge.

Okay, okay, I stole this idea from one of the 20 million holiday catalogs we’ve gotten since August.  Having both candied orange peel and almonds in the house, I decided to see if I could come up with a recipe.

I started by toasting about a cup of almonds.  I used blanched because that’s what I had but I don’t see any problem with using skins.

Then, I couldn’t find my camera.  So a bunch of stuff happened that didn’t get captured digitally.  Here is the short of it though: I melted together butter and white chocolate.  Incorporated the usual suspects: eggs, sugar, flour and a healthy does of vanilla (no silly, not in that order).  Finally, I folded-in the toasted almonds and orange peel.  Into the oven.  And.

This is what came out.  The orange peel sort of melts into blondie and the result is a sweet/zesty/nutty treat.  Sort of like me.

Once cut, I packaged them up and took them to a cookie decorating party. 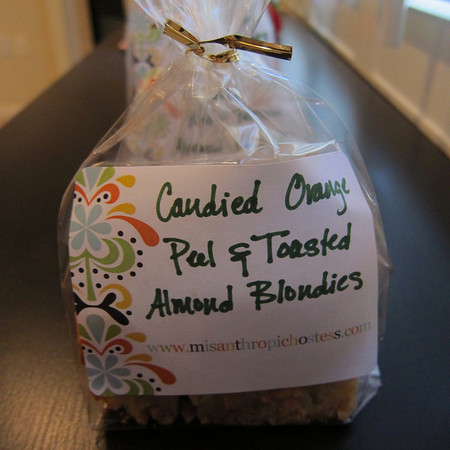 Glee Christmas on Pandora, because I’m perfectly confident with my manhood. I know that Thanksgiving was so last month.  But, I also know many people step and repeat for Christmas so I thought I’d share links and whatnot to the recipes we used this year.

Let’s start with the turkey.  Ours came straight outta Compton.  No really, it did.  TD is generally in charge of the bird.  And, as you’ve seen in this blog, he does it a little differently every year.  Highlights have included the baducky and last year’s slow cooked turkey breast.  For years the guy has been talking about frying a turkey.  Luckily for our neighbors and home owner’s insurance premiums, the voice of reason has always won out.  Until we realized that someone else could make our fried Thanksgiving turkey.

Minimal research revealed that the place to buy fried turkey in Los Angeles is a little shop called Loreto’s Fried Turkey Restaurant (just in case you were confused about what they sell).  The fact that it is located in Compton was just the icing on the cake.  See, it meant that TD and his partner in crime for the day didn’t really have to give up the requisite element of danger that comes with procuring a friend turkey.

And let me tell you, that turkey was fantastic. 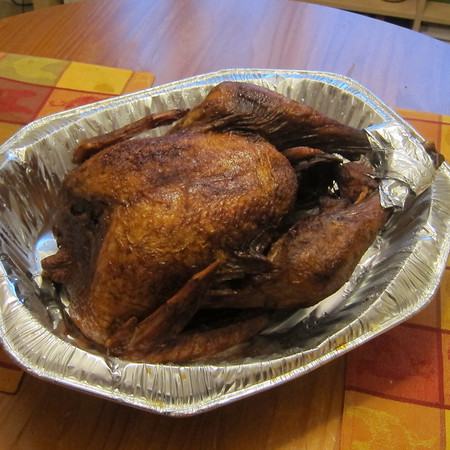 Surprisingly so.  Juicy, flavorful and made in someone else’s kitchen.  All the things that a Thanksgiving turkey generally is not.

While there is absolutely no denying that the Compton turkey was the star of the show, I think the sides made excellent supporting stars.

This year I made my favorite sourdough and artichoke stuffing from Sunset Magazine.  My version swaps-out white mushrooms for cremini and I like to add a little sweet Italian turkey sausage to the mix. Grilled brussels sprouts. Just par-boil your sprouts, then marinate in a vinegar based sauce (I like to use balsamic).  When ready, grill in a grill pan.  Easy as that. And of course no Thanksgiving in the Misanthropic Household would be complete with out a Chocolate Sees Turkey or two.