Ever since I was left with three-quarters of container of toasted black sesame seeds they’ve been calling to me from the “S” section of the spice rack in our pantry.  So I thought, what if I replaced some of the almond flour in my french macaron recipe with black sesame flour? 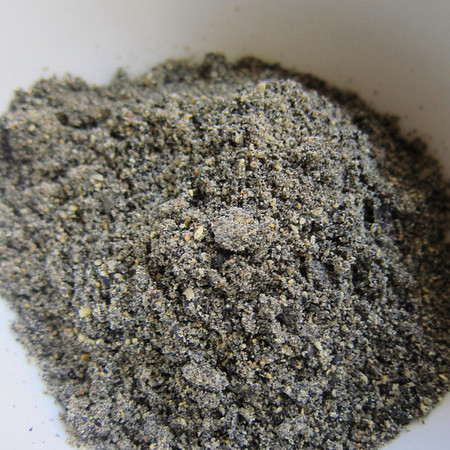 My base recipe calls for 120 grams of almond flour.  I swapped-out 50 grams of almond meal for 50 grams of ground black sesame seeds.  Now, generally, the taste of macaron shells is very delicate, bland even.  In fact, most of the actual flavor from these sandwich cookies comes from the filling.

So, I was very surprised at how flavorful the batter was.  In fact, you could probably reduce the ground sesame seeds to 30 grams and still achieve toasted nuttiness.  I love the color of the batter.  I used almond flour from shelled almonds.  Trader Joes sells an almond flour with the shells ground into it that would give these little gems even more depth.

Even with the significant sesame content, I got feet.  Though, a true coniseuer would point out that the feet are horizontal suggesting a too-hot oven.  Whatever. I liked the honey and black sesame combination used to make sesame paste and went on the hunt for a honey-based filling. The original recipe called for sour cream, but I was curious and swapped it out for full-fat yogurt.  I liked the resulting tang, but you can do what you’d like. I wanted something to balance the sweetness of the honey and the nuttiness of the sesame shells.  A little hidden dollop of orange marmalade to the very center of each macaron did the trick.

We already know what a lovely affair the relationship between french and asian techniques and flavors can produce.  And what more perfect venue is there than the frilly and vain macaron to play with interesting and exotic combinations? I’ve chronicled my adventures with French macarons thoroughly here and here and here.  Read the first link for specifics on technique.

I like to use a stencil when I pipe my shells.  On parchment, I trace circles of desired size (20 for a half-sheet).  When it’s time to pipe, I lay an additional sheet of parchment over the pattern and cook the shells with both sheets.

This will easily fill about 20 complete macarons

I found the flavors melded nicely after the macarons were aged int he fridge a couple of days.

2 thoughts on “The macaron rides again”