and two weeks to go!

I’ve lost count of the number of shortbread and sable recipes palling around on the Misanthropic Hostess. 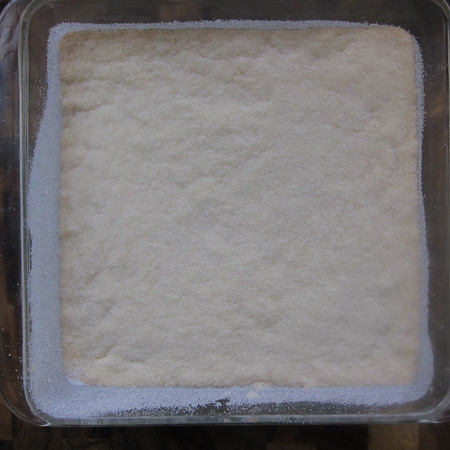 I think shortbread has become my holy grail. Such a simple cookie.  And, probably because of this, so easy to get “not quite right.”

This recipe comes from the first Tartine cookbook.  I bought the book for the famed bakery’s laminated dough recipe.  But, like a moth to the flame, this, not their croissants was the first recipe I tried.

And, it does not disappoint. It’s crisp yet tender, light yet sings of butter.   In fact, of all the recipes I’ve tried over the years, this one comes the closest to, what I’m beginning to suspect is an imagined shortbread ideal.

…this isn’t counting the toffee, a late swap-in for the bad caramel juju I had going on.  I’ll figure out how to count this at the end…but for reference, there are currently six, one-gallon bags of it sitting on our piano.

I have now entered the “what was I thinking” portion of this regime.  It happens every year and I liken it to when I used to swim the 1,000 .  Every time I’d pass the 350 mark…when the adrenaline of the start had worn off but there were many flip-turns to go I’d always wonder…what the hell am I doing?  Of course, if I made good time (for me), the whole thing was over in about 11 minutes.  Holiday bake-a-palooza takes significantly more time though is no less athletic.  At least I can listen to podcasts as I bake.  When I swam I used to sing REM’s End of the World over and over. At the end of week one:

…and this party is just getting started…

Research tells us that smell is one of the strongest memory evokers.  One example of this for me is the shampoo and beauty aisle in the grocery store.  Every time I walk by the end-cap I get hit with the almost memory of shopping with my mom as a small child at the local Alpha Beta.

The smell of the spices in pumpkin bread is another one in my nostalgia rolodex.  As a kid, my family spent many summers camping in the Sierras and throughout the Pacific Northwest.  In preparation for these trips, my mom would make (what seemed like) endless loaves of pumpkin and banana breads to sustain us on the road.  To this day, the smell of pumpkin bread reminds me of cold mornings on picnic benches waiting for the sun to crest the mountains as the smell of coffee percolating (in a real percolator) on the Coleman stove slowly filled the air. It doesn’t matter that I don’t really like pumpkin bread.  Or banana bread.  The idea of it always makes me happy.

I needed something to take to a morning committee meeting in early October (I’ve talked about how I sometimes have to incentivize my committees before) and in coming up with ideas it occurred to me that the Misanthropic Hostess was lacking a pumpkin bread recipe.

Never able to leave a good recipe alone, I realized that pumpkin is an excellent backdrop to a host of flavors.  In this iteration I added toasted coconut and dried cranberries to one loaf and white chocolate chips to the other.  Nuts are also an obvious addition here but the receiving committee has a couple of members with nut allergies and the last thing I want on my employment record is murder via baked good.  Bright citrus zest or a sweet carmel sauce would also play nicely with pumpkin.

Want to win some goodies?  Go here and make your guess in my annual holiday bake-a-palooza contest.

adapted from Libby’s available at www.cooks.com

Nope, it’s not the ultimate cheer.

In this case, it’s what’s on the inside that counts.

I officially kicked on my holiday baking on November first with eight batches of assorted sable dough.  While these babies were the first made, they’ll actually be the very last to be baked-off at the end of the month.

As the long time listeners know, I have a contest each year to make this month of madness a little more interesting.  The first year was about pounds of butter.  Last year was we did ounces of sugar.

Here is how this will work.  You all have until midnight next Monday to guess the total number of cookies, candies etc that will be “delivered” as part of my holiday baking machine. We’re going with units delivered instead of units produced overall because while I try to be as efficient as possible I also always leave room from mess-ups, broken cookies etc in the overall totals.

Leave your best guess in the comments section of this post.  The winner will get an extra batch of their favorite treat–and yep, I’ll ship.  Each Tuesday I’ll provide an update of the running total.

To help you along, I’ll give you some hints:

In addition to regularly scheduled Thursday posts, each Tuesday I’ll update with a running total.  This number will be slightly off from the final (total produced versus total delivered) but will be a decent real-time estimate.  I’ll also be instagramming the good, the bad and the ugly if you want to follow along: #TMHostess