So, you made my tahini blondies but you’ve got some tahini left and don’t really feel like making hummus.  What should you do? 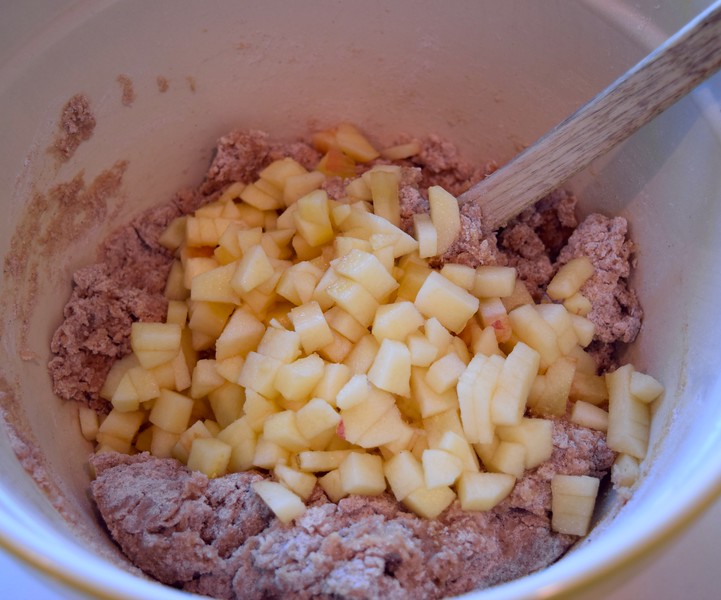 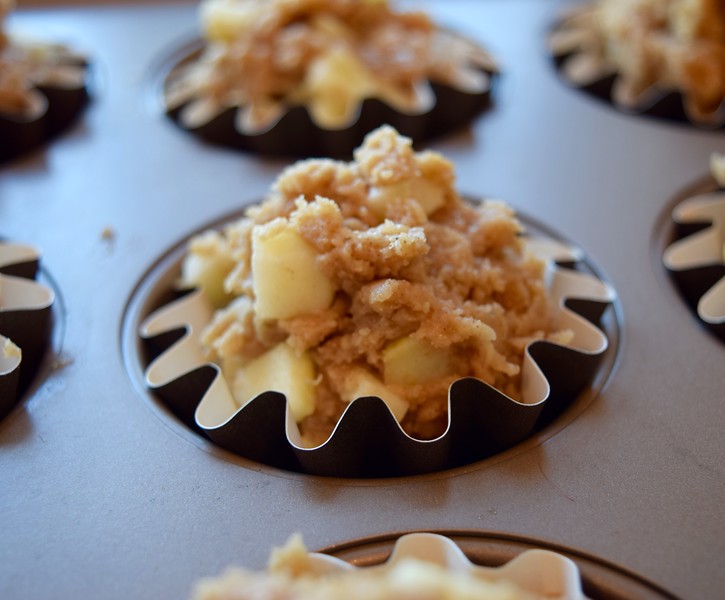 These were super easy to whip up while Gracie and TD read the Sunday paper.

While these are a nod to a lunch box favorite, apples and peanut butter, the spice mixture makes them a little more exotic.  The tops get crunchy while the apples help to keep the insides moist.

taken directly from Food 52 (where it seems all my recipes have come from this year).

As you may recall from previous episodes, we spent a good amount of time, effort and shoe leather traipsing around the greater Torrance area getting approval for, among other things, a new, expanded deck for Via Corona.  Sadly, due to a lack of funds in our greater wallet area, the expanded deck was relegated to phase II.  Or III.

And so, against my nonexistent better judgment, I set about beautifying the existing deck.   The game plan going in was: “we’re not trying to win the championship, just make the loss look respectable.”  As you’ll soon see, for a number of reasons, even this was a fool’s errand.

The deck itself is kind of like Charlie Sheen. It’s 50ish, but looks much older.  Impossible to dry out.  In desperate need of lasting rehab.  Filled with cocaine and strippers.  Ok, the last one is exclusively about Charlie Sheen, but you get the picture.  If not, here’s a picture (or two).

Shannon had a 10-day business trip to the Land of China (where people hardly got nothing at all) and so I promised a , , respectable deck upon her return.

I only missed it by 10 days . . . and I would have gotten away with it if not for those meddling kids (and the Internet, and the weather, and my own ineptitude, and . . .)

But I’m getting ahead of myself.  Let’s go back .

Before we get started, a little note on the ABC’s of me.  For some reason my father and brother are what I would call handy people.  I am not.  Not even close.  And yet I am a perfectionist when it comes to these projects.  That is to say, I notice the flaws, rather I fixate on them  . . . and they haunt me  . . . forever.  For this reason, and the aforementioned appalling lack of handy-ness (handitude?), I normally eschew anything approaching home repair and improvement.  I once paid a man to install a toilet paper holder in our old house.  A poor man’s Bob Vila I am not.  A homeless man’s Bob Vila is more apt. [SF note: what he’s left out of this story is that he attempted to install the TP holder on his own, couldn’t, and then spent the next weekend obsessing over it while the hole in the bathroom wall grew.  Finally I convinced (hen-pecked) him into calling in a professional who not only had to install the holder but also patch and paint the wall].

Prior to owning Via Corona, I had rehabbed exactly zero decks and so I took to the Interwebs for instructions.  Surely there had to be a foolproof way to get a sparkling deck.  Right?  Well, no, there’s not (and don’t call me Shirley).

The shallow web is good for some stuff, like bitching about movies, or bitching about sports, or bitching about politics, but finding facts?  Not so much.  The problem is that every answer is there.  Should I buy a commercial deck stripper or use a home made concoction including oxygenated bleach?  What about a pressure washer?  Should I use two coats of sealer or one? The definitive answers are, of course, yes, definitely  . . . or absolutely not . . . or concentrate and ask again.   Whatever you want the answer to be, you can find some mustachioed dude in coveralls offering a video sermon confirming your preordained version of the truth.   Not to be sexist, but I found no women who had an opinion.  Guessing they were all in China.

If there was any consensus of opinion it seemed to be that the project would be cheap, easy and unless you were a complete simpleton, complete in 2-3 days.  In hindsight, this is the deck rehab equivalent of “if you like your doctor, you can keep your doctor” or “we’ll make Mexico pay for it” if you prefer.  Just like everything else about our dear Via Corona, it cost more, took more effort and dragged on forever.

Armed with my own set of “alternative facts” I set about cleaning the deck.  I decided to go with a belt and suspenders approach.  I started with the home made concoction with the commercial solution warming up in the bullpen.

In all of the videos I’d watched, deck cleaning appeared to be child’s play.  Simply squirt some oygenated bleach with dishwashing liquid mixed in and watch as years of dirt and grime magically bubble to the surface, requiring no more scrubbing than you’d use on the sensitive parts of an archeological dig or in washing a toddler’s hair (mind you, these are two additional things I’ve never done).

Maybe your deck comes clean with a gentle fairy dusting, but Via Corona comes equipped with mold, mildew and the the funk of 40,000 years.  It took a bit more elbow grease.  After two rounds of home made cleaner and scrubbing like I was trying to get Karen Silkwood clean, I called in the commercial product.  Here’s the result.

Halftime:  Come On Up For The Railing

While the deck dried, I moved to the rusty railing.  If the entire project took 400 hours, the railing took 401 of them.  Through the hours of wire brushing, sanding, taping and priming I asked why I started this in the first place.  I also listened to Spotify.  I have exactly zero railing tips or tricks; however, I would recommend the most recent efforts of the following musical artists (in this order):  Michael Kiwanuka, Bruno Mars, Rag and Bone Man and Lake Street Dive.

When Paulie asked Rocky what he saw in his sister, Adrian he said, “I don’t know, she fills gaps.  I’ve got gaps.  She’s got gaps.  She fills gaps.”  Leaving aside the Adrian Balboa had to have been the worst sports movie wife in history (“You can’t win!” she says at one point.), I decided to fill some gaps in the deck.  In retrospect, I probably could have (and should have) left this alone, but welcome to the thing I will now fixate on forever.

This would probably be a good time to mention that I filled the holes with putty because the deck was constructed with a combination of pressure treated lumber and the original planks from the Mayflower.  Not for nothin’ but the makers of Viagra have never seen wood this soft, amirite?

I should mention here that the railing primer was oil-based and the paint was not.  I was told this wouldn’t be an issue by an employee with two (count ’em, two) neck tattoos.  Nothing says, “yeah, lifetime minimum wage is fine for me” like two neck tattoos and yet I was only too happy to buy whatever she was selling.  Essentially the staff at The Home Depot are human versions of the internet.  Walk in with a theory.  Walk out with a fact.

If Lie #1 was “requires no scrubbing”, Lie #2 was “covers in 1 coat!”  Call me a wild-eyed optimist, but I truly, madly, deeply wanted to believe the paint would cover in 1 coat.  About .0045 seconds after the paint hit the railing it was apparent it covered like a white defensive back.  No doubt I was in for a second coat.  And maybe a third.

Though she was staying at the same hotel in Beijing as Secretary of State Rex Tillerson, it was eventually apparent that Shannon would return home just as the second coat of paint was drying.  That was until The Flaking.  I woke up on a bright Sunday morning to find that the black paint was flaking off in spots like it had some kind of deck leprosy.   If you’re a fan of the F-Bomb, I dare say you would have been impressed by some of the new and creative uses for the word I came up with during yet another round of stiff bristle brushing & sanding.

Sealing:  A Long Run For A Short Slide

I sealed the entire deck in 90 minutes.  Probably the first time its ever been sealed.  It looked better.  Actually good-ish.  The wood putty looked pretty stupid though.

As Shannon’s plane touched down at LAX there was work to be done on the infernal deck, but it would have to wait.  My handy brother rightly suggested that I wait a bit to see if more of the railing would flake off (it didn’t).  Besides, my spidey sense told me it would be a good idea to pick my wife up from the airport if I didn’t want to end of sleeping on the freshly sealed deck.

Completely unrelated, but we were rear-ended by a giant truck on the way home from the airport.  It had a giant roll bar on the front which was painted flat black (I notice these things now) which is how I got two holes in my bumper.  Everyone is fine, but the car has about $2,500 worth of damage.  So I’ve got that going for me  . . . which is nice.

Over the next week I re-filled all the holes in the deck with a different kind of putty and painted them brown so they would be less noticeable.  I repainted the railing and convinced myself and everyone around me that the flaking was weather-related.  The the railing maybe needs a third coat, but she ain’t getting it from me.  In one last fit of pique I resealed the already sealed deck with an opaque stain that looks absolutely the same as its semi-transparent predecessor in my view (I had hoped it would hide the patches).

In the end, our creaky deck took 43 hours and about $200 to get an LA face for its Oakland booty.  In the hands of a capable person (or just a person who values his/her free time) it might’ve taken half that time.  Then again, that person would’ve charged me more than $200 beans to slap lipstick on this pig.

On Saturday I spilled a few drops of beer on the deck and it beaded on the surface.  I’m calling that a win. 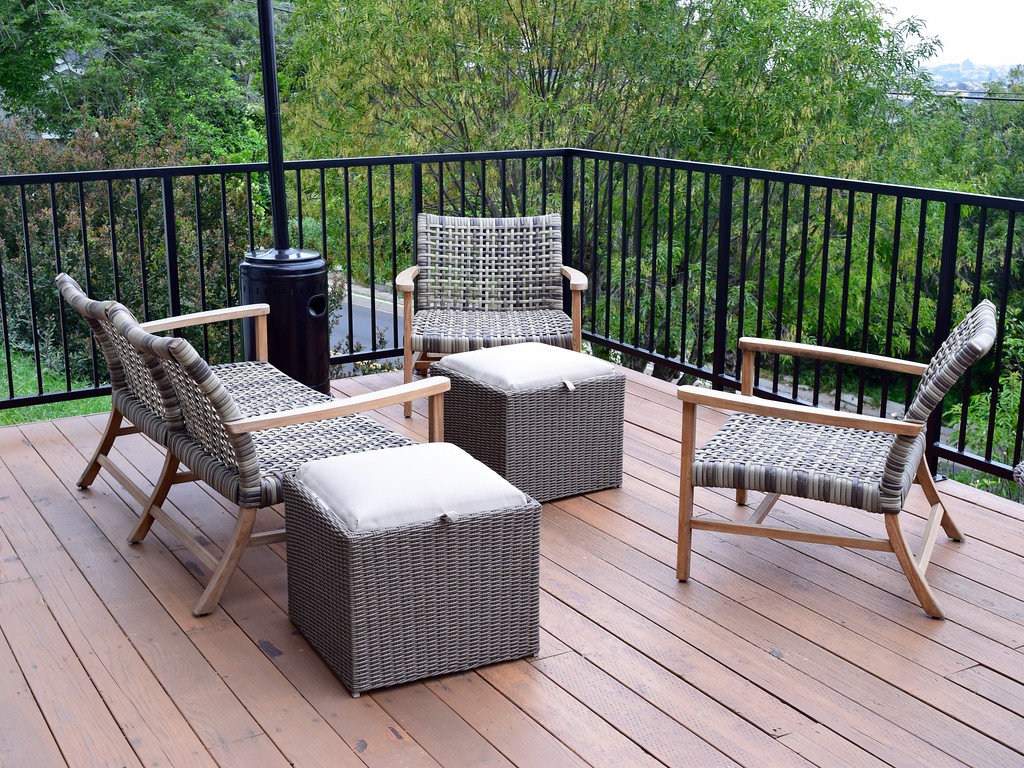 She may not hold up during a Bruno Mars dance party but she’ll keep until we scrape together the funds to tear her down and build something nice.  That’ll do, pig.  That’ll do.