TD here.  When The Misanthropic Hostess herself told me I had the incredible honor of writing up Via Corona’s exterior, I really didn’t know what to say about an edifice that was both far from good and not good from far.

Shannon here…do you have any idea how long he’s been waiting to incorporate something from Rocky into a Via Corona post?  Dude just seriously dropped his mic and walked off stage. 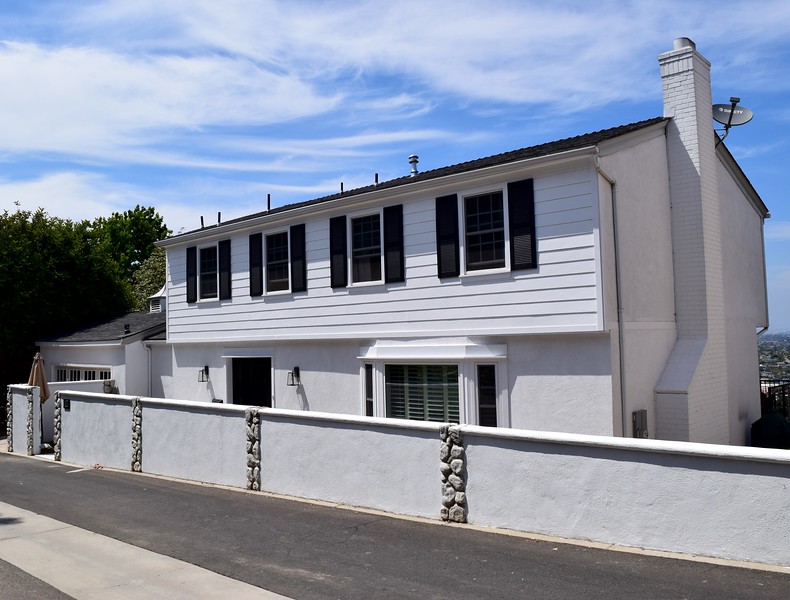 Is it me or does that sound vaguely dirty?

The seed for this recipe was planted one Friday evening at the Fresh Choice Market in Lomita CA.  I drive by this newish grocery store on PCH every day on my way to work (and sometimes on my way home).  Unfortunately, it’s closed when I’m driving in and on the wrong side of the street to easily stop into on the way home. 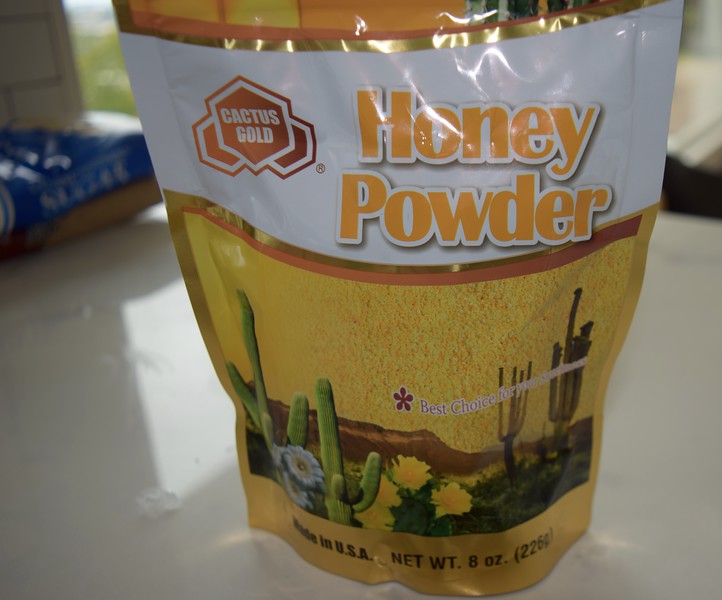 So, it wasn’t until one early Friday evening that I finally had a chance to experience the Fresh Choice Market.  To quote Stefon, “this place has everything!”: panderia, Jerusalem bread shop, baklava station, insane carniceria, crazy exotic produce section, aisles and aisles of international ingredients that I’d previously only been able to order.  I wasn’t the only person with conchas on my mind that Friday–the place was packed with all kinds of people.  After slowly perusing the market, I somehow ended up with a cart full of interesting odds and ends I had no idea I needed.  Among them was a pouch of honey powder.  Per its name, honey powder is just dehydrated honey and can be used as a sugar substitute.  I’m always on the lookout for new things to put into French macarons so I grabbed a bag. 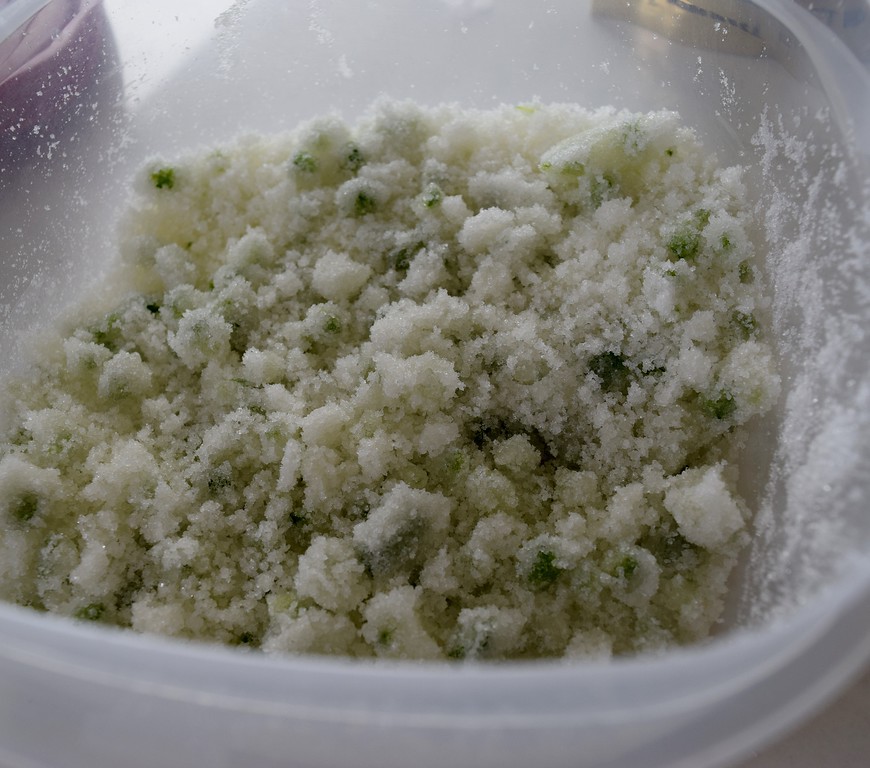 With the Via Corona renovation wrapping up, much of my free time is still spent on “house stuff” so macarons won’t be on the agenda until late summer. 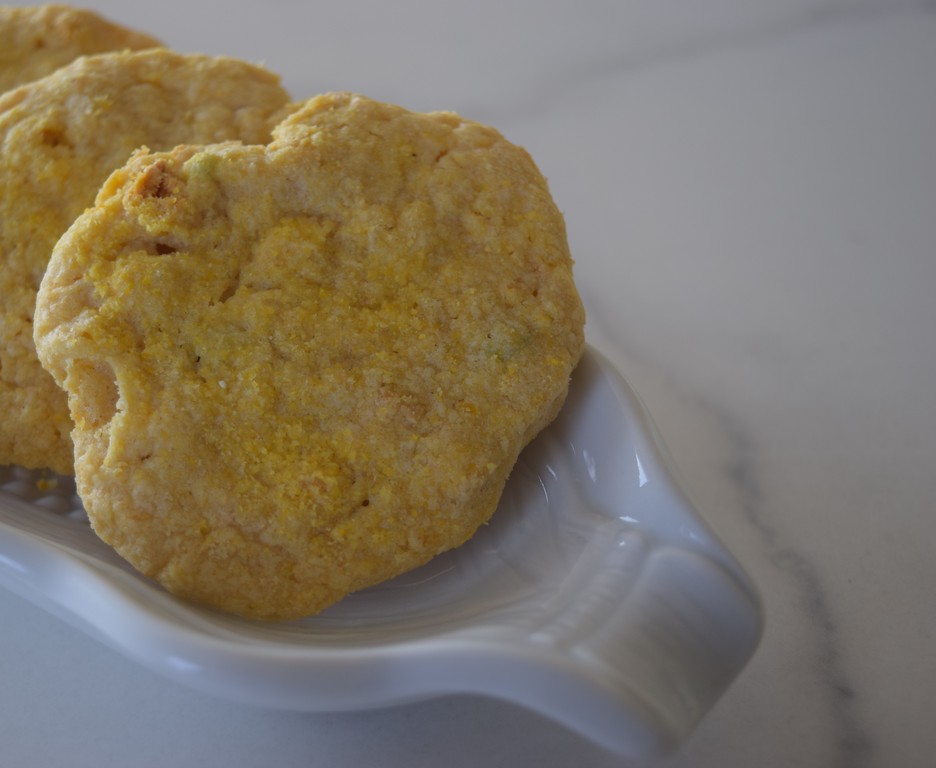 But regular cookies I can do.  I love Christina Tosi’s corn cookie recipe and have been looking for excuses to play with it some more.  Honey powder was my in.  Honey, corn and jalapeno are great friends in a biscuit, corn bread or scone so why not a cookie?  I replaced some of the sugar with the honey powder and then  infused a diced jalapeno into the remaining sugar.  In addition to using the freeze-dried corn powder in the original recipe, I also threw in some whole freeze-dried kernels for additional texture. And there you go: you say summer, I say corn (honey, jalapeno cookies)! 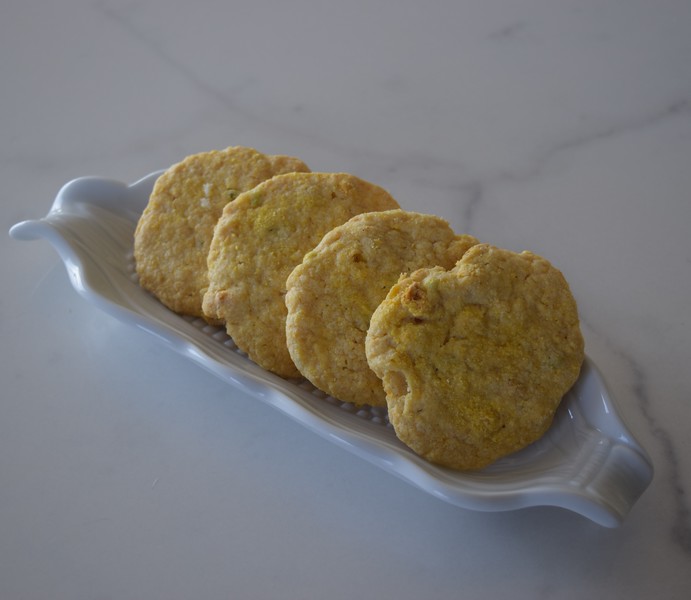 So I have an admission to make about these cookies.  While I thought they were fun and tasty, when it came to offering them up to others, I completely chickened out.  I had a box ready to go in to work and couldn’t bring myself to bring it in.  The box sat on my counter for three days until I gave up and threw it out.

Note–I use the weight not volume measurements for this recipe.

While the foyer probably has a lock on “Most Improved” in the Via Corona superlatives, her powder room is a serious honorable mention (and is a ringer for best personality).  Recall that she started with pink and brown tile–with curtains to match–that ran all the way up the wall to be crowned by a coved ceiling in frothy white frosting. 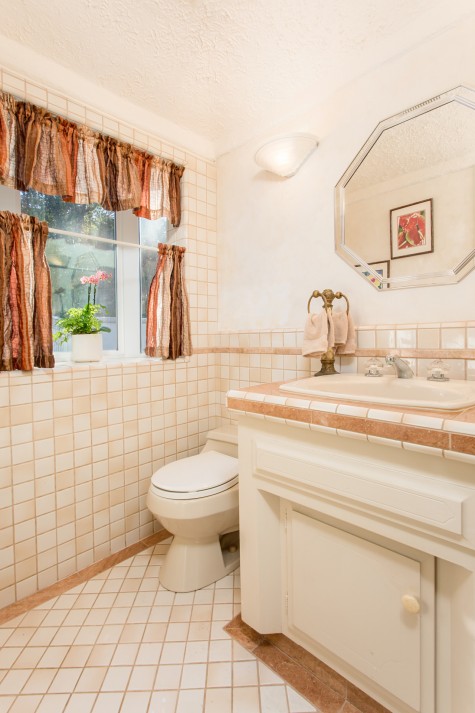 The craftsmanship in this space was remarkable.  I mean look at it–the former owner laid ALL that tile by hand.  However, we quickly tired of the phone ringing and the voice on the other end telling us that 1985 was, like, oh my god, calling and wanted its loo back.

Little did we know that it was about to get much worse very quickly. 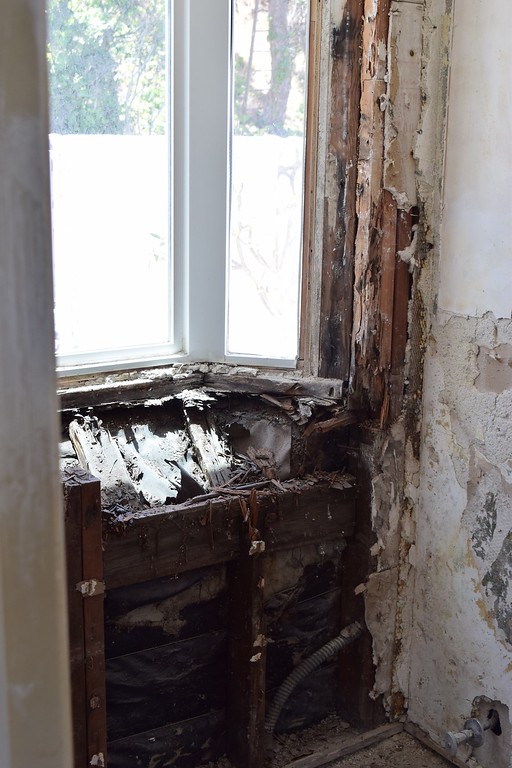 Termites and Southern California go together like peas and carrots.  And let me tell you, this bathroom was serving up a hungry man’s portion.  I think I told you how we were afraid to go in here for fear of falling through the floor.  And yet, we couldn’t stop checking on it to confirm and reconfirm how awful it was.

As I explained in the powder room plans post, we gave up about a foot in this space for a little bit more room in the kitchen.  We don’t miss it.  Also, out of sight but never out of mind, we also raised the roof in here.  1985 would be totally pleased.

Going with an exposed sink was a bit of a risk, but with a room that now measures roughly five by five feet, I wanted to leave as much open space as possible.  Besides, it’s a powder room.  Other than a spare roll of toilet paper or two, this space has no need for storage.

We frosted the generous but poorly placed window (it’s the first thing you see when you walk into the courtyard).  While there is potential for some evening shadow-puppet shenanigans, forgoing any window treatments also helped to keep the space open.

The light fixture, hook and TP holder all came from a shop called OneFortyThree.   The proprietor started the company after renovating his own house (and blogging about it).  OneFortyThree was a delightful find and I feel a sense of (completely unwarranted) renovation camaraderie with the owners. 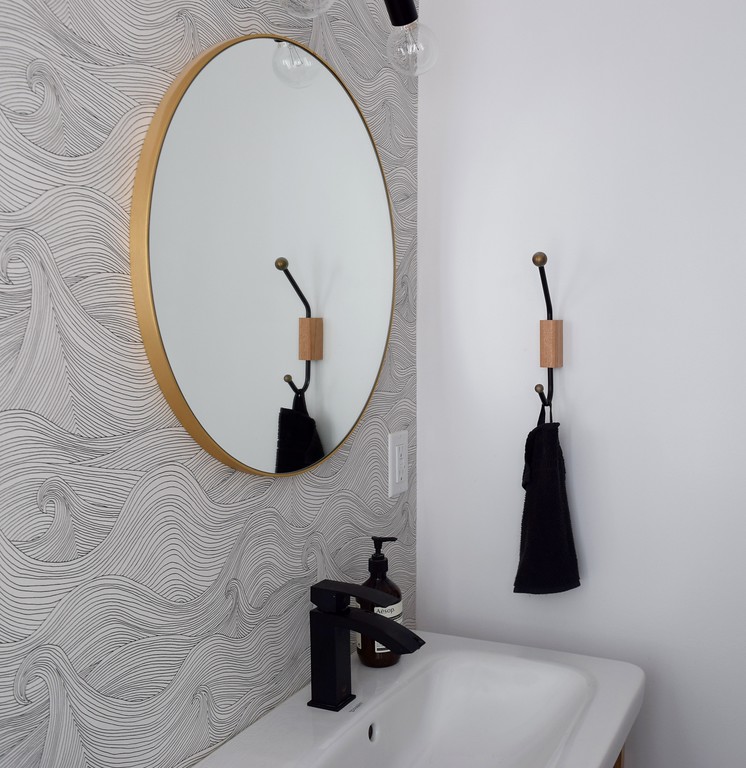 Of all the baubles in this tiny space, finding the right mirror was the hardest.  While incredibly fashionable, that sweet hexagonal mirror that was originally in the powder room just didn’t fit right with the new vibe.  I ordered and returned three or four (and kept yet another one for a different space).  This one came from CB2 and we have two other iterations of it in other parts of the house including the guest bath.  (Note the photo bomber.)

In a move that some future homeowner will most likely describe in the same OMG so outdated way I described the pink and brown tile on the original, I decided to go with black fixtures.  This began when I fell in love with a gamine faucet from Ikea that was nimble and elegant.  Sadly, by the time I got around to ordering it, the faucet was no longer available.  At that point I had my heart set on powder-coat and found this one in our price range at Home Depot.

A digression if I may.  If this project were to have a catch-phrase, it would be: because that’s what we could afford.  The market is rich with gorgeous finishes and fixtures–from bathrooms to kitchens to lighting–most of which weren’t even close to being in our budget.  While Pinterest, Instagram, Google and the others offer a vast universe of design opportunity, they don’t account for price point.  Just about every finishing material in Via Corona was inspired by one thing but executed as something like it that was in our budget.  Welcome to the real world. 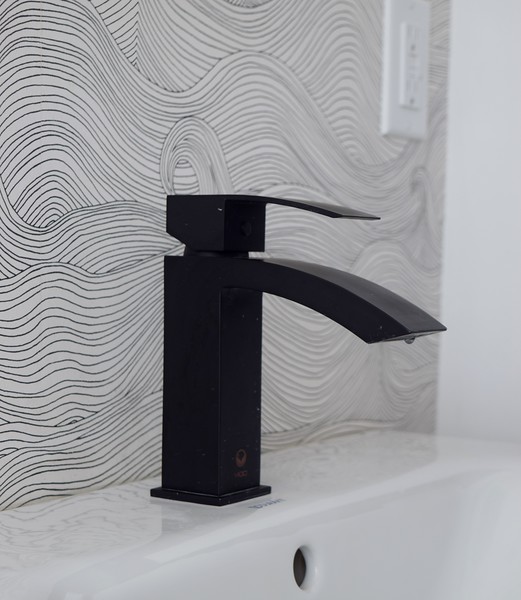 As you probably don’t recall, I’d originally planned encaustic cement tile for the powder.  I spent weeks looking for just the right pattern (that we could afford).  I put (paper) samples up on the wall in my office and asked for the opinion of anyone who entered.  It became a minor obsession.  But after all that searching, I couldn’t pull the trigger. I actually had the tiles in my cart, finger hovering above the order button and then I clicked away.

The design universe works in mysterious ways and the moment I gave in and admitted I didn’t have the cojones for bold tile, I chanced across this wallpaper design by Abigail Edwards.  It’s a subtle nod to our (hopefully) subtle beachy vibe for Via Corona.  It’s also a nod to Edward Gorey, a longtime favorite of mine.  Not wanting to go so far with the sea-theme as to actually make people seasick, we stuck with the pattern on one wall only. 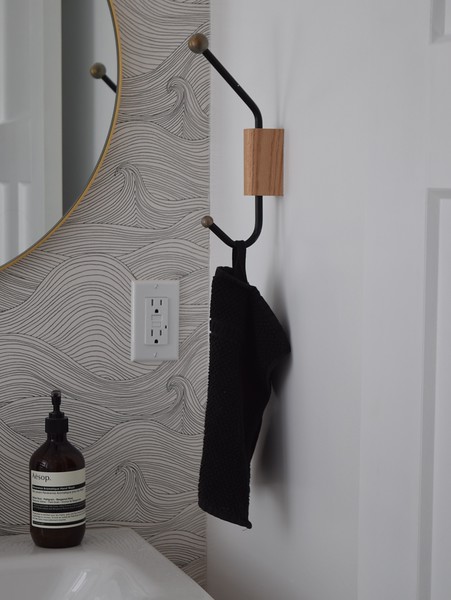 There she is folks, though she be small, she be mighty. And, at least in my estimation, she has a great personality!    I purposely keep the door open so that I can take a glimpse every time I walk by.

And it’s true about what he said in the Entryway Reveal post:  TD isn’t allowed to use the sink in here.  For the record, I’m not either.  The wallpaper–though perfect for the spot aesthetically–is actual untreated paper.  While the occasional splash from hand washing is fine, everyday wear and tear would probably make quick work of this delicate covering.  It breaks my rule of not having anything in the house too precious to be used BUT I’m pretty sure it’s the only thing that does.

And now for the montage you’ve all been waiting for.

And oh so far away

I was in a social club

It probably isn’t appropriate to riff on a Carpenters song in the same post as a cookie recipe.  It also isn’t particularly appropriate or appealing to use the words dirt and cookie in the same sentence.

But anyways.  I think we’ve already talked about the whole sorority thing  right?  I loved my Hellenic days and now more than 20 years later, I continue to be impressed by the accomplishments of the women I chose as friends in college.

But what does this have to do with dirt?  Long before Pinterest, some clever member came up with (or borrowed) a bid-day treat that was as much an institution in our organization as owls and the Chi Omega Symphony: flower pot sundaes.

Nowadays, anyone who can Google garden party knows what these are.  Crafted in tiny flower pots,  a layer of ice cream is topped with fudge and then finished with ground-up Oreo cookies.  A straw is  inserted into the concoction so that an actual daisy pops out of the center. 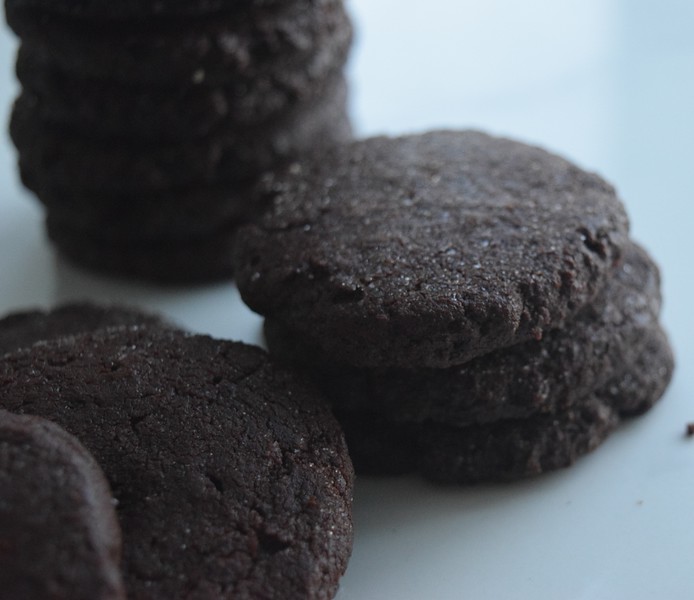 Pretty mundane by today’s standards, but in the mid-nineties, these were the pinnacle of sophistication (at least to me…so take it with a grain of salt).

What does all of this have to do with today’s post?  Well, I’ve been playing with Christina Tosi’s cookie recipes (again) and made her chocolate-chocolate cookies to get the wheels turning.  Simple though it appears, this deep, dark treat is fortified by a chocolate crumb.  Or, for the more literal, chocolate dirt (I think Ms. Tosi would support and encourage this idea).

Consider yourself warned.  In the coming weeks, alternating between Via Corona posts, I have half a dozen riffs on Christina Tosi cookies.  This one is a straight shot, but future cookies will feature ingredients like jalapeño, Nestle’s Quick, graham crackers, honey powder, crunch berries and Ritz cracker sand (in no particular order or combination).

for the chocolate crumb

Combine the butter, sugar and glucose in the bowl of a stand mixer fitted with a paddle.  Cream together on medium-high for 2-3 minutes.  Scrape down bowl, add the egg, vanilla and melted chocolate. Beat for 7-8 minutes.

Reduce the mixer speed to low and add the flora, cocoa powder, baking powder, baking soda and salt.  Mix just until the dough comes together–no longer than 1 minute,  Scrape down the sides of the bowl with a spatula.

Still on low speed, add the chocolate crumbs and mix just until incorporated, about 30 seconds.

Using a 5/8 ounce scoop (or heavily rounded tablespoon), portion out the dough onto a parchment-lined sheet pan.  Pat the tops of the cookie dough domes flat.  Wrap the sheet pan tightly in plastic wrap and refrigerate for at least 1 hour, or up to 1 week.  Do not bake at room temp, they won’t bake properly.

Arrange the chilled dough a minimum of 3 inches apart on parchment-lined pans.  Bake for 10 minutes, rotating pans halfway through.  The cookies will puff, crackle and spread.  It’s tough to gauge if a cookie that is this dark is done.  If, after 10 minutes, the cookies still seem doughy in the center, give them another minute in the oven.

Cool the cookies completely on the sheet pans before transferring to a plate or an airtight container for storage.  At room temp, the cookies will keep fresh for 5 days, in the freezer they’ll keep for up to a month.