Spoiler alert–the next few weeks are all David Lebovitz recipes all time.  I’ve probably already talked about how much I enjoy the author, blogger and former Chez Pannise baker.  But have I talked about his Instagram (@davidlebovitz)?  I don’t experience a ton of social media envy but Mr. Lebovitz curates his gram very, very well (and enjoyably).

I can’t remember if I saw this pretzel crust on his instagram or blog but I knew I had to try it out with “why didn’t I think of that” urgency. 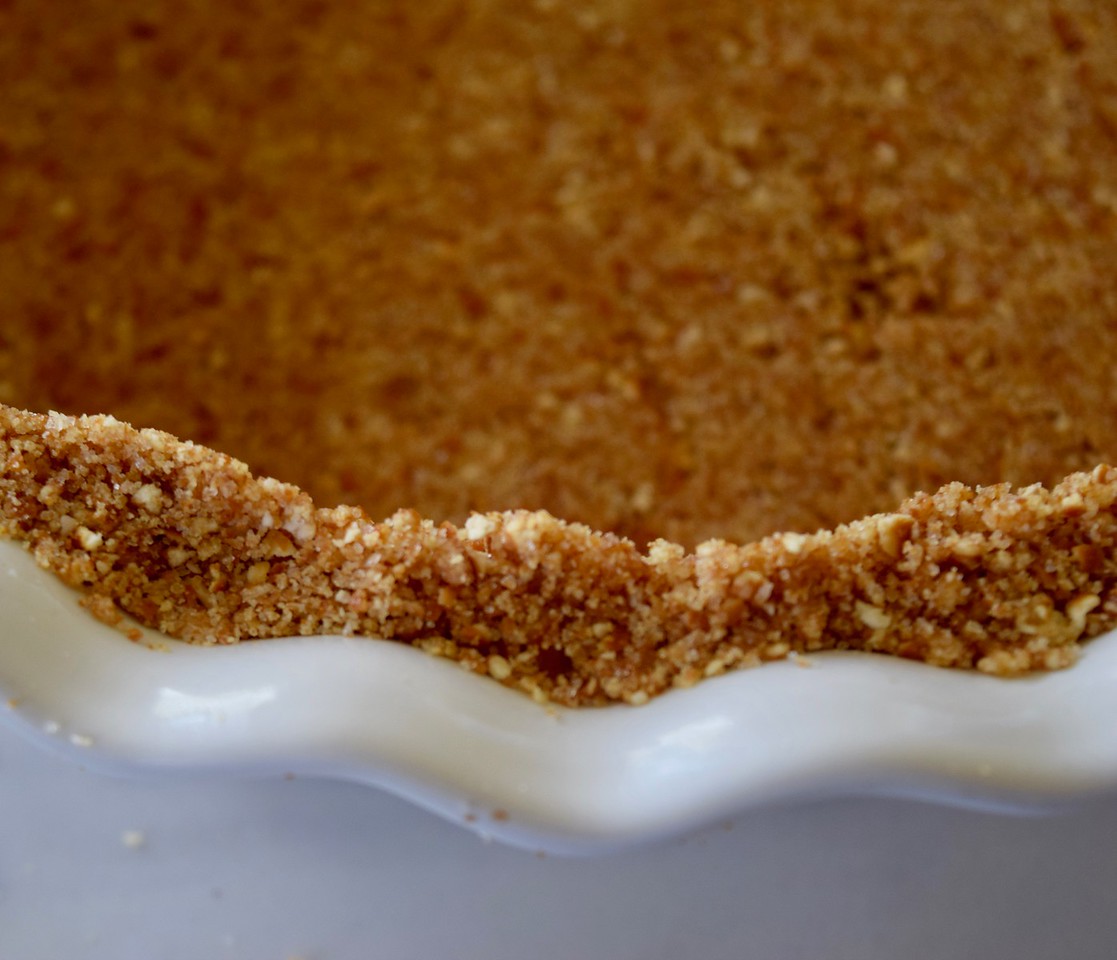 He paired it with a salted honey filling.  And since honey pie sounded simultaneously sounded delicious and novel, I followed suit.

A note on honey.  I used what I already had in the pantry–which I think was an everyday clover honey.  Mr. Lebovitz suggests using a darker honey because it is less sweet.  About a week after I made this pie, I was chatting with a former student who had spent some time during her after graduation travels working on  a kibbutz in New Zealand that made manuka honey (produced from the Manuka tree).  Manuka honey is pretty pricey–but also supposed to be medicinally magical. So next time I might spring for some Manuka honey for a salted honey pie…as if pie could get any more transcendental. 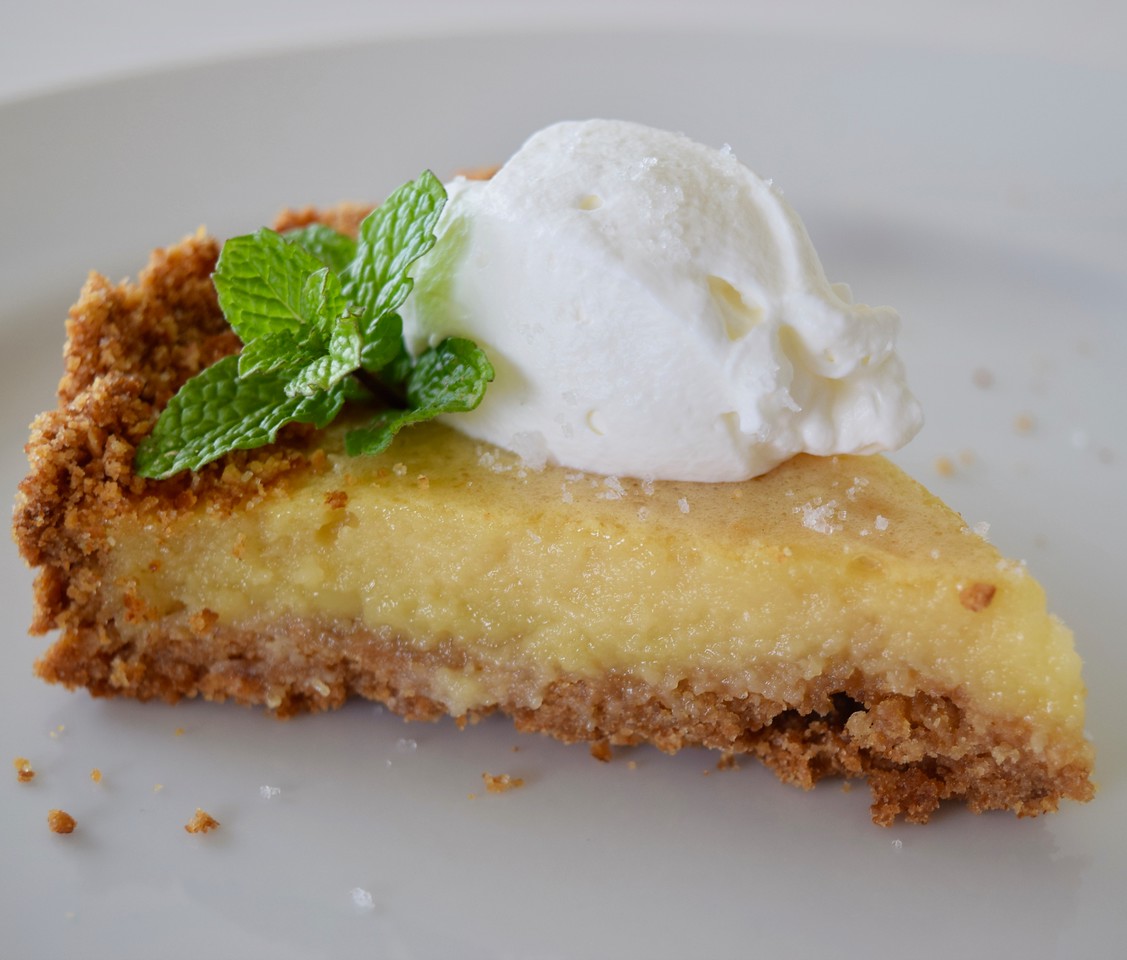 While I didn’t find the honey taste to be particularly overt, the combination of salty pretzel and creamy rich filling was incredibly satisfying (at least until I wanted another bite).

1. Preheat the oven to 350ºF (175ºC). Lightly butter a pie plate or pan with butter.
2. In a medium bowl, mix together the pretzel crumbs, sugar, and melted butter until the crumbs are saturated with the butter and everything is moistened and evenly mixed.
3. Transfer the mixture to the prepared pie plate or pan and use the heel of your hand or the bottom of a coffee mug (TMH preferred method) to press the crust mixture across the bottom of the pans and up the sides.
4. Bake the crust for 8 to 10 minutes, until it’s slightly golden brown. Let cool on a wire rack.

for the pie and filling

Preheat the oven to 350ºF (175ºC).
Note: Mr. Lebovitz offers a variation whereby you replace 3 TBS of the dairy (cream/sour cream etc) with bourbon or dark rum.  Someone needs to do this and report back.

Every time I eat a tomato I think about how sad it is that Tom Brady and Gisele Bundchen don’t. 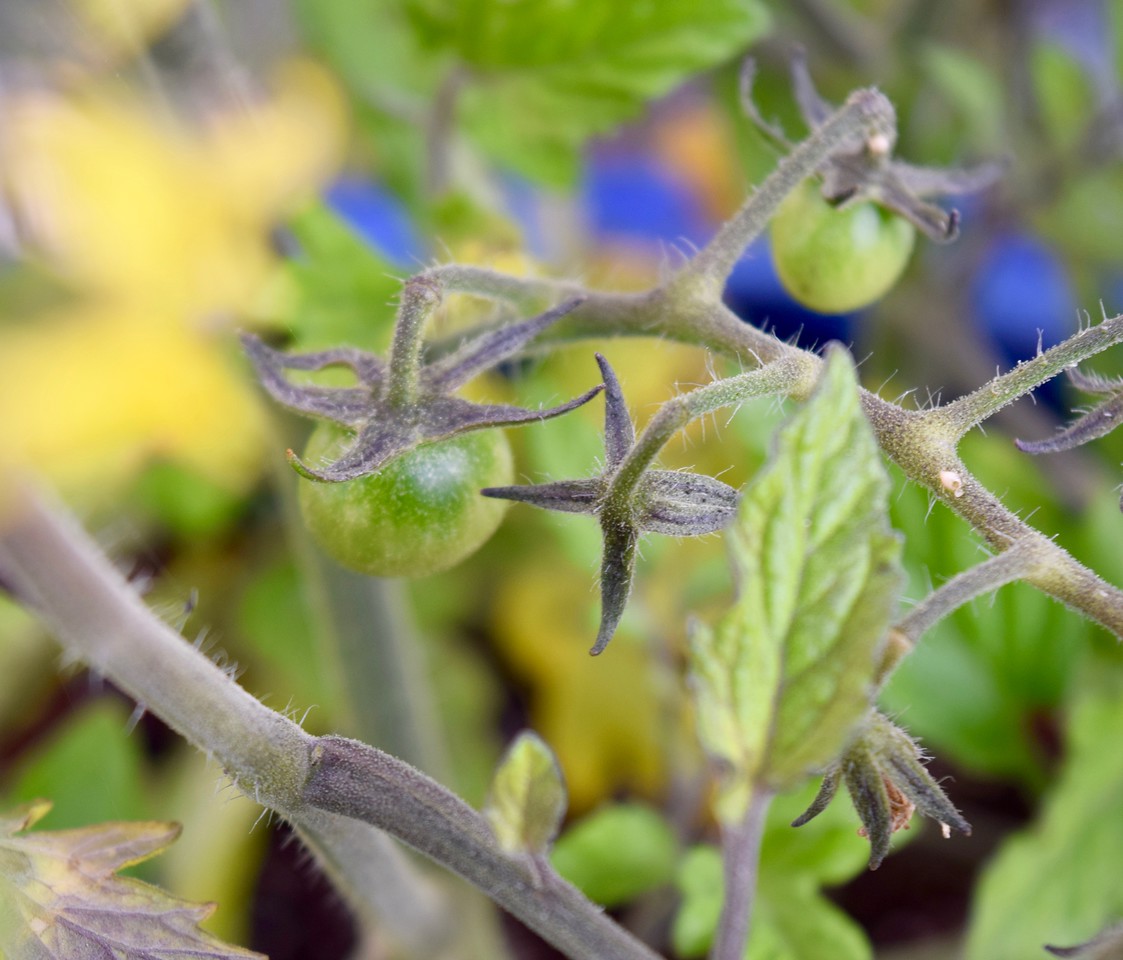 While eating tomatoes may be keeping TD and I from being professional athletes and/or super models, if shunning night shades is wrong, I don’t want to be right.

In fact, we eat a lot of tomato salads nearly year round.  During the summer we eat the ones we grow and the rest of the year we stick to the smaller grape and cherry varieties because I think they taste better than other store bought offerings. 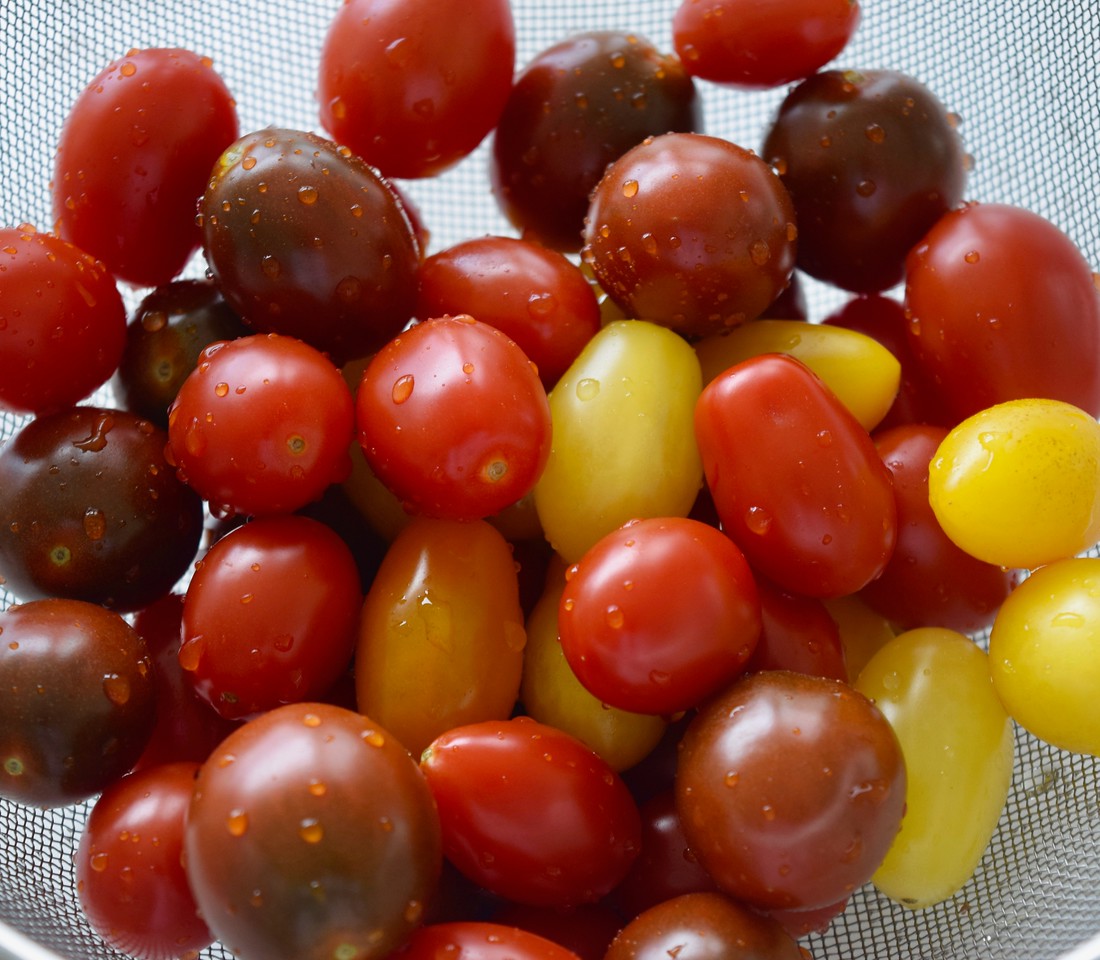 It should be no surprise then that when I spied a recipe for tomato salad with pine nuts and pomegranate molasses in May’s Bon Appetit I immediately added it to our Sunday dinner plans.

Per the recipe’s author Kamal Mouzawak, apple cider soaked golden raisins make this recipe just a little bit extra.  The pomegranate molasses is a bonus but you could also use that great balsamic molasses you can find at Trader Joe’s.

I diversified the herb select just a little in my version mostly because I can’t resist adding mint to everything.

I also snuck in some avocado.  I’m pretty sure I don’t have to explain why. Really, this is less a recipe and more a set of guidelines to riff on.

Add a grilled protein and dinner is done!

I’m an unabashed fan of Instagram.  Unsurprisingly, most of the content I consume outside of friends stuff consists of cooking/baking, house design and cats.  Thinking about it, I may follow more cat than human accounts.  If you follow me on the Gram (oh God) [@tmhostess], you’ll know that this basically mirrors the content I produce.

Like the technologically advanced game of telephone that it is, one of my favorite aspects of Instagram is discovering new to me accounts.  One such discovery a couple of years ago was Tiegahn Gerard of Half Baked Harvest.  Her food styling is so good that I enthusiastically followed her account for months just for its gorgeous aesthetic before I realized I could actually make everything she posts.

I know, I’ve never claimed to the be the quickest horse in the race.

I’ve made it a goal to experiment with yeast for the next few months (when my kitchen is finally warm enough to proof dough) and Tiegahn’s cheesy swirly rolls were at the top of my list.

This recipe is rich with possible variations but I went with parmesan and pesto for these Easter dinner rolls.

The dough is supple and incredibly easy to work with (I made some slight tweaks to it in an attempt to develop the dough’s flavor just a snidge).

The second proofing is subtle, but worth the time.

And, before you know it, you’ll have a pan full of cheesy, chewy rolls.

But I wouldn’t blame you a bit (and I definitely wouldn’t tell anyone) if you decided not to.

adapted ever so slightly from Half Baked Harvest

Does your mom like wine?  Of course she does.  That is why you should probably make her this cleopatra/vineyard cake for Mother’s Day. 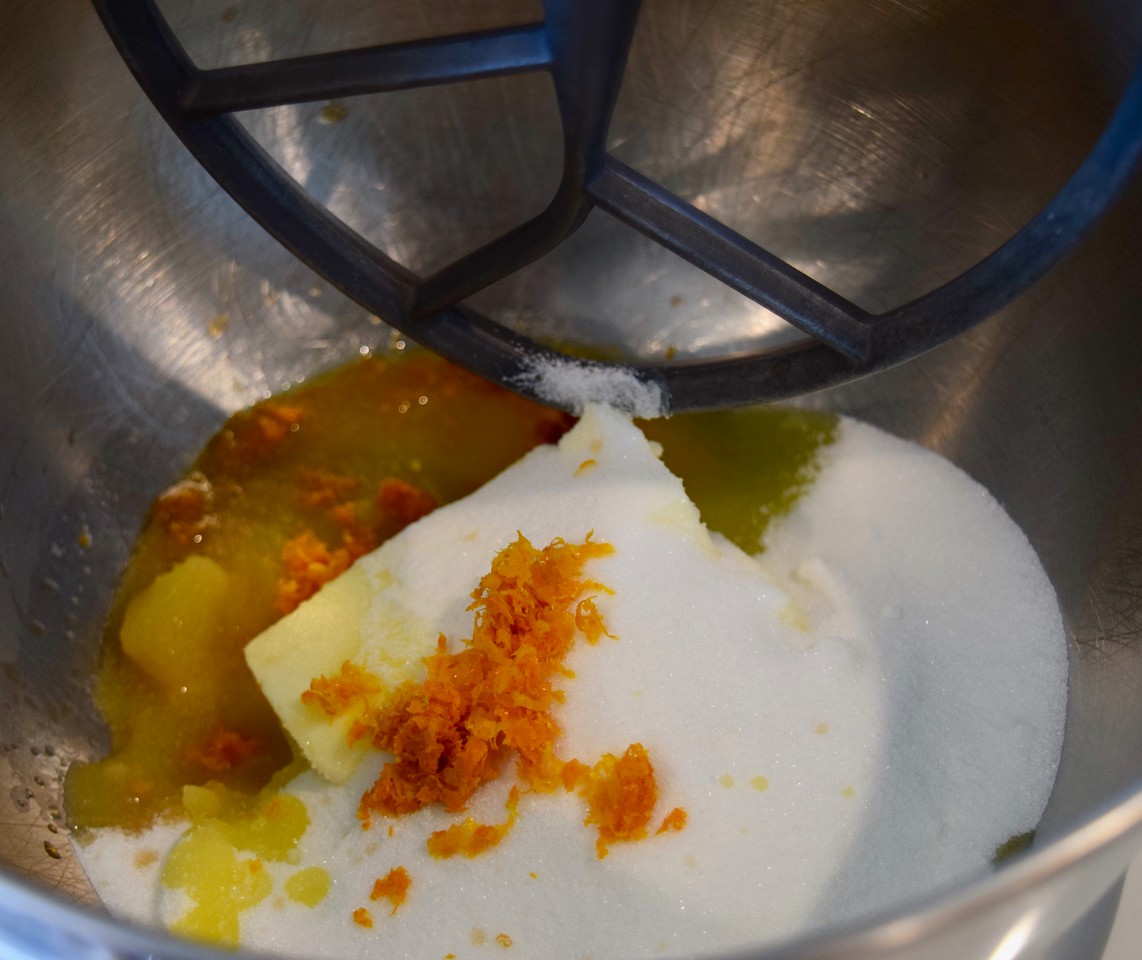 I’ve made my devotion to Yotam Ottolenghi and Helen Goh no secret around here, exhibits: damn cake, tahini cookies and chocolate Krantz cakes.  I recently spent a very enjoyable afternoon going through their book Sweet cover to cover earmarking recipes to try.

Intruiged by a cake with grapes, their cleopatra cake was first on the list.

According to the authors, the recipe came from Mr. Ottonlenghi’s friend who found the original in Gourmet magazine.  Got and Ottonlenghi then adapted it for Valentine’s Day, coronated it Cleopatra cake (on account of the grapes that serve as jewels on this crown of a cake).

The grapes are a lovely addition, but this really is a wine-forward cake.  Like, WINE forward.  The recipe calls for a specific dessert wine called Carte Or Muscat de Beaumes de Venise.  I did a little research before I went hunting for it locally and while it seems well known in Europe (and a favorite of Nigella Lawson), it’s not as common in the U.S.

So, I substituted a nice muscat-based dessert wine.  One word of warning: if you decide to make this cake, be prepared to use the whole bottle.  I did not play close attention to the amount the recipe calls for when I bought the wine and was surprised when called to drain every last drop of the bottle into my measuring cup.

But, come on, your mom is worth it.  As I mentioned, this is a wine forward cake…kind of like your grandmother’s holiday rum cake.  It is rich, fragrant and very indulgent.  As such, a little goes a long way so this would be fantastic to bring to a Mother’s Day brunch.  As a bonus, because this cake is so fortified, it will stay fresh (nay, dare I say even get better) for a few days.

And happy Mother’s Day to all the moms out there.  I raise a toast (wine, cake or both) to you all!

I’m embarrassed to admit that I’ve only recently discovered Ruth Reichl.  Earlier this year, a friend recommended Tender at the Bone: Growing up at the Table, by the former Gourmet Magazine Editor in Chief (among many the other accomplishments including four James Beard Awards).

Actually it wasn’t so much a recommendation as it was a reference to the book the friend assumed I had already read.  Again, embarrassed.  So, in turn, I’m assuming everyone else already knows (and has known for most of her more than 40 year career) who she is.

But, just in case not: she’s wonderful.

Anyhow, in April of this year, Epicurious ran a feature by Ms. Reichl titled “I’m Ruth Reichl, and These Are the Best Recipes from my Gourmet Years.”

Knowing what I had learned just before this article came out, I was ready to take her word for it and, went straight for the first of two dessert recipes featured in the article: a Raspberry Crumble Tart by Ruth Cousineau featured in the August 2006 edition.

The first thing that jumped out at me was that the recipe calls for six, yes 6 cups of fresh raspberries (that’s four of those little containers these expensive little jewels usually come in).

Looking between my tart pan and the bowl of berries, I couldn’t quit figure out how I was going to get them all in there.  Me of little faith.

The next notable thing about this recipe is that the fruit does not get sweetened.  Here are in ingredients for the raspberry filling: raspberries.  There is some sugar in the crumble on top, but none in the fruit.  Again, me of little faith.

Finally, there is the crumble.  To be clear, you could put crumble on an old sock and I’d eat it.  With enthusiasm.  But, I at least, generally think of crumble as a topping on something homey and unrefined.  On an elegant tart? Well.

You don’t need to hear it from me because Ruth Reichl already said it–but I’m going to say it anyway: trust the process.  To begin, your house will smell like everything early spring and summer hint at being: tangy, sweet and full of promise.  Then there is the tart itself, as inviting as it is sophisticated.  Sweetened only by the berries, the filling is bright, clean and gorgeous against the crumble rich crust.  Serve it with a generous dollop of real whipped cream and nobody will remember the meal (or anything else) that came before it. 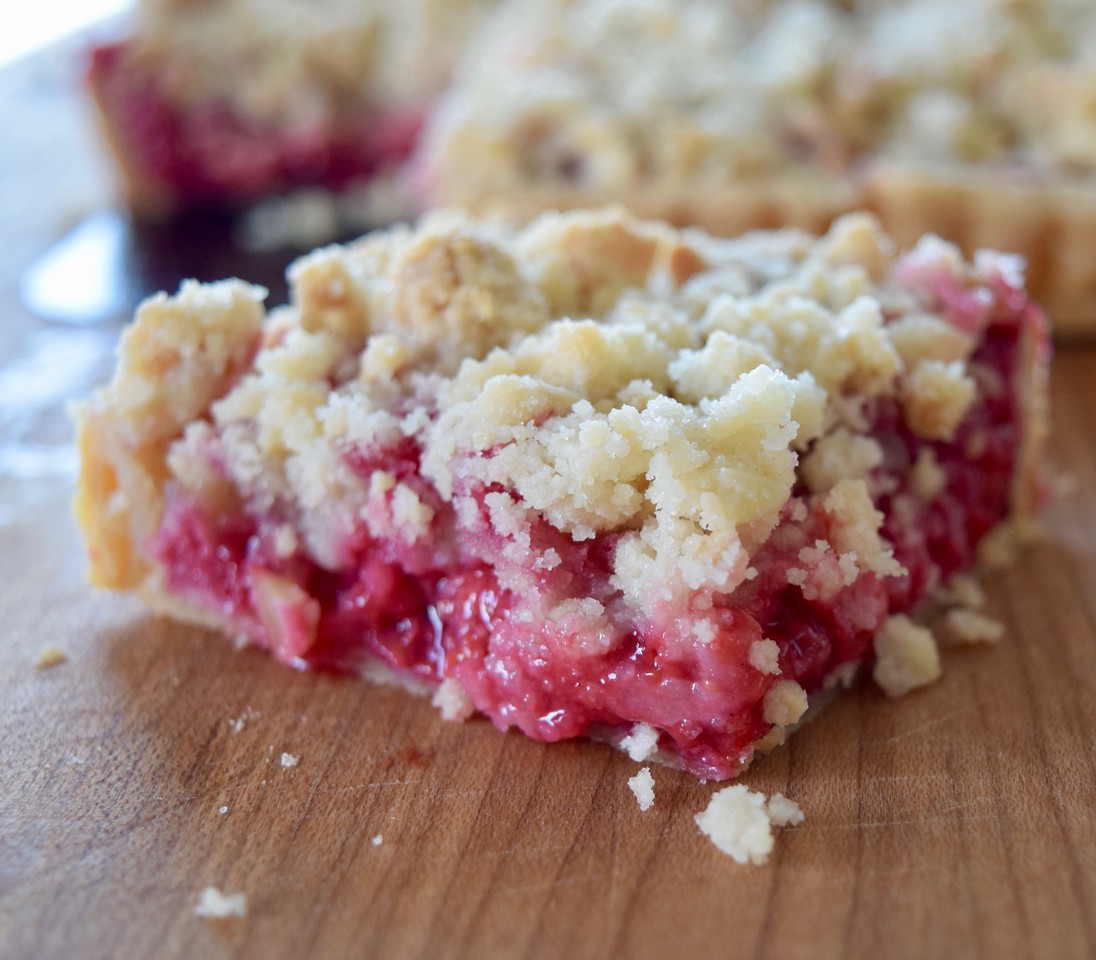