These are quite possibly the weirdest thing I’ve ever made.

I’m not even going to make you try to guess the odd ingredient (mostly because it looks so weird in the pictures that I don’t want your mind going creative places).

Olives.  And chocolate.  Yes, you read that right.

Does it help if I explain these are meant to be barely sweet and enjoyed with a nice glass of red (and maybe a sharp cheddar)?

I will say that I actually had to drink a couple of glasses of wine before I worked up the courage to bake these babies off.

And you know what?  They were delightful.  You don’t get olive so much as you get salt.  Which is nice with cocoa.  If you are looking for something a little unusual to add to a cheese board or maybe a unique addition to the traditional host gift of a bottle of wine, give these a try. 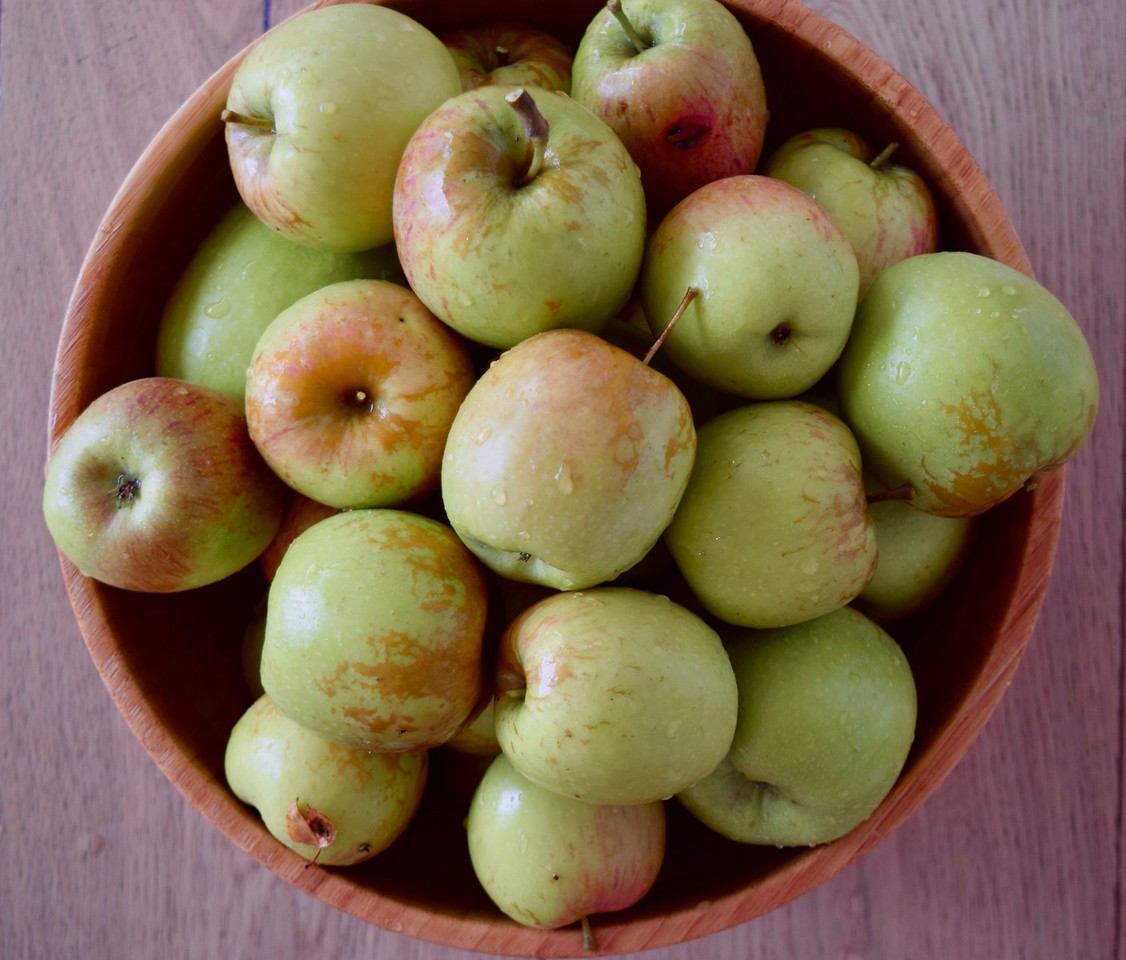 While TD and I have worked hard to tame Via Corona’s front and side yards, most of the remaining lot has been left to itself.  We aren’t negligent.  The geography of our neighborhood can best be described as canyony (technical term), so many homeowners in the area opt to allow their steeply sloping lots to grow wild.  With the exception of about a four-foot lip right at the house’s edge, our backyard is one giant slip and slide.

The picture above is from the actual real estate listing–before we got our hands on her.

It wasn’t until we closed escrow that we discovered some previous owner had long ago planted a couple of apple trees right off the deck. 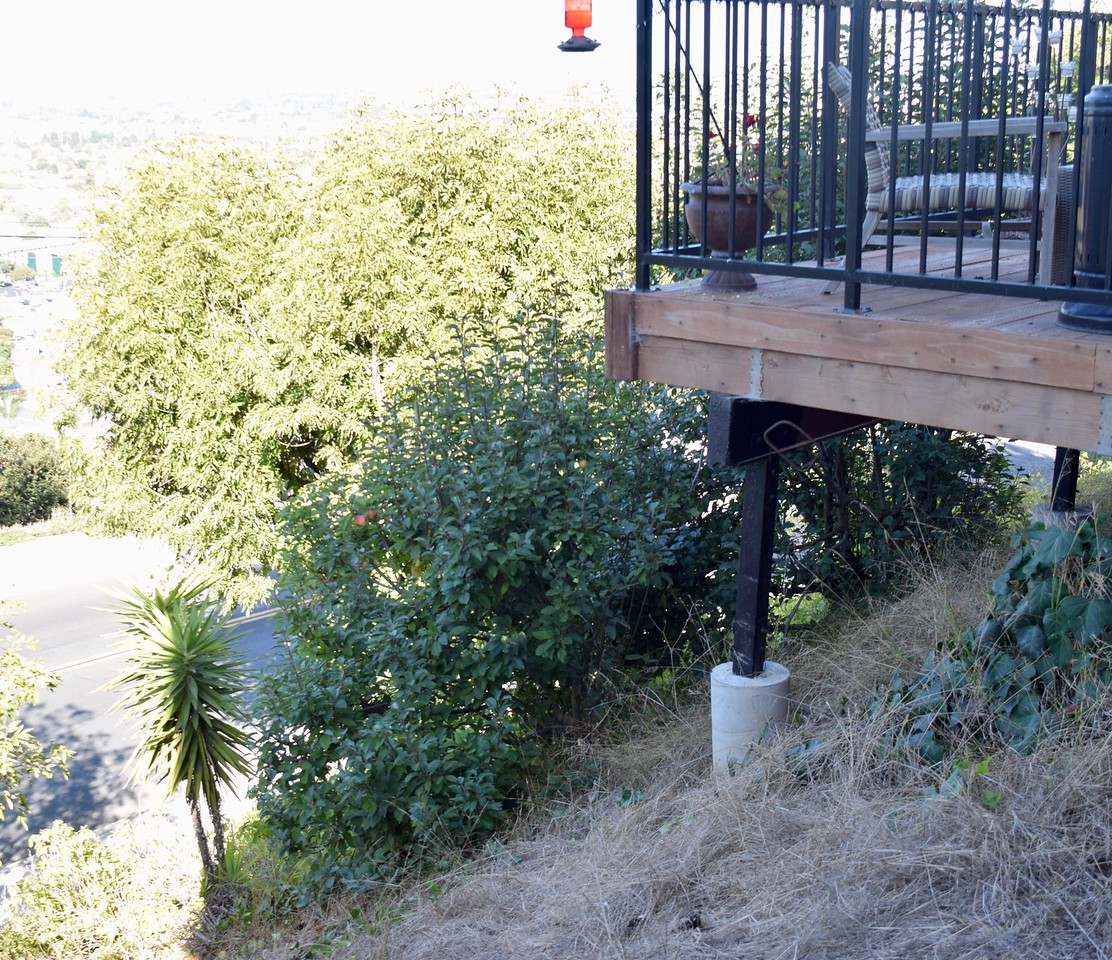 In each of the three falls we’ve lived in Via Corona, the trees (more like bushes because of the slope) have born tons of apples.  The first couple of years we left the apples alone because I was afraid of what the construction run-off might have done to the fruit (I have no basis for this fear).

This year however, I got brave.  After several weeks of peering over the side of the deck, I picked my way down the slope and had my own little basic girl fall experience. 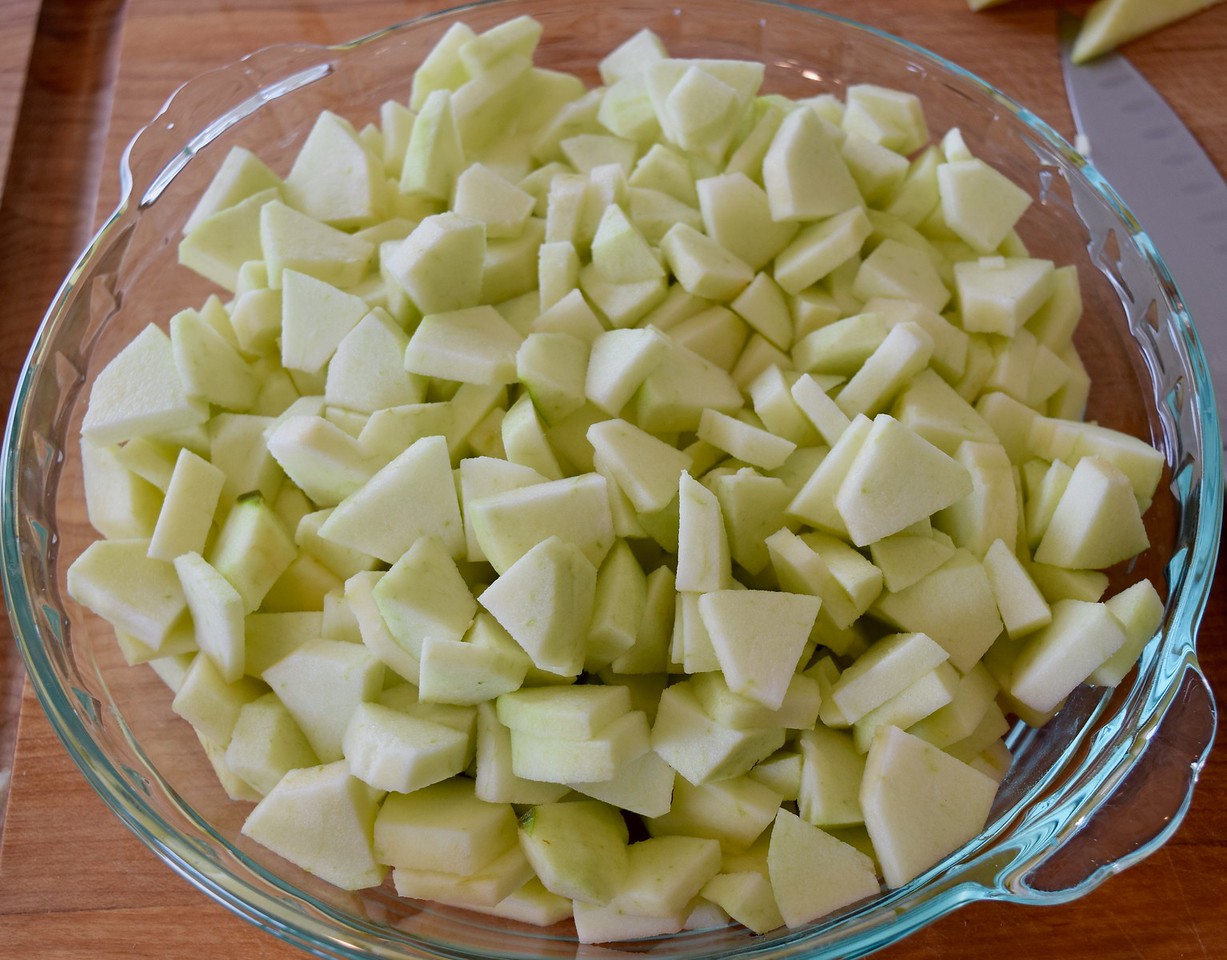 In less than 10 minutes, I picked about as many pounds of apples.  We have no idea what kind they are–though they resemble Granny Smith in taste and consistency. 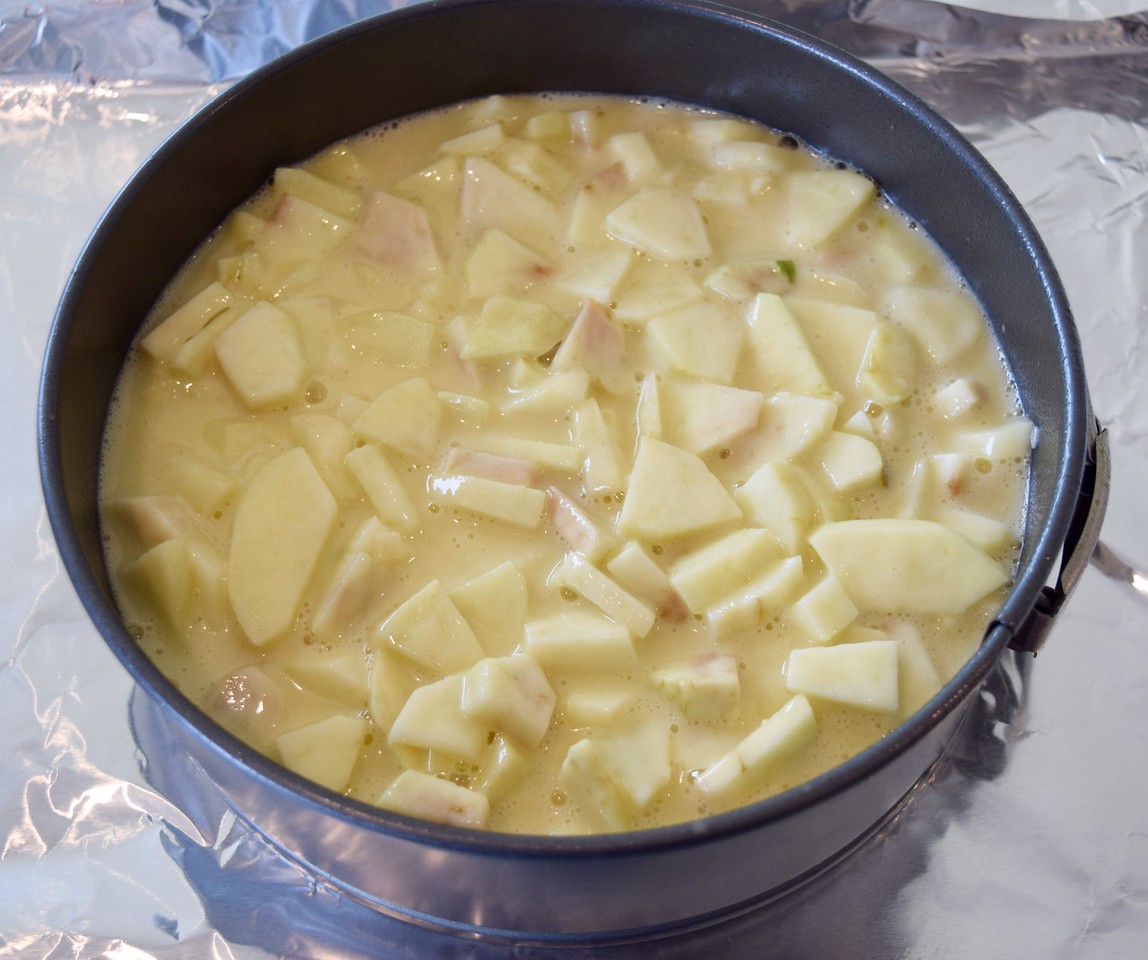 Because of the slope and potential for wild animal encounters (we’re pretty sure the raccoons, skunks and opossums are running an Air BNB under the deck), we’re calling them danger apples. 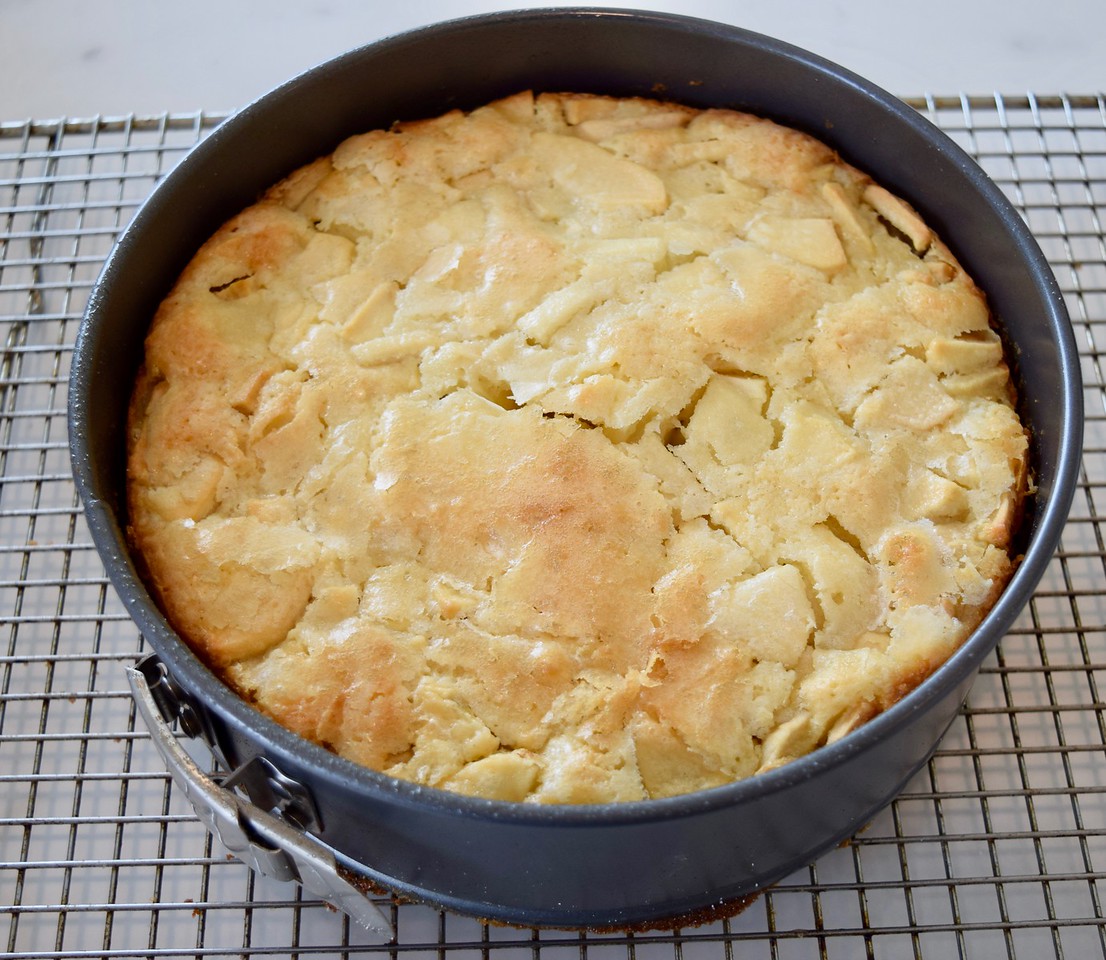 What do you do with 10 pounds of apples?  I started with this fruit-dense custardy apple cake. 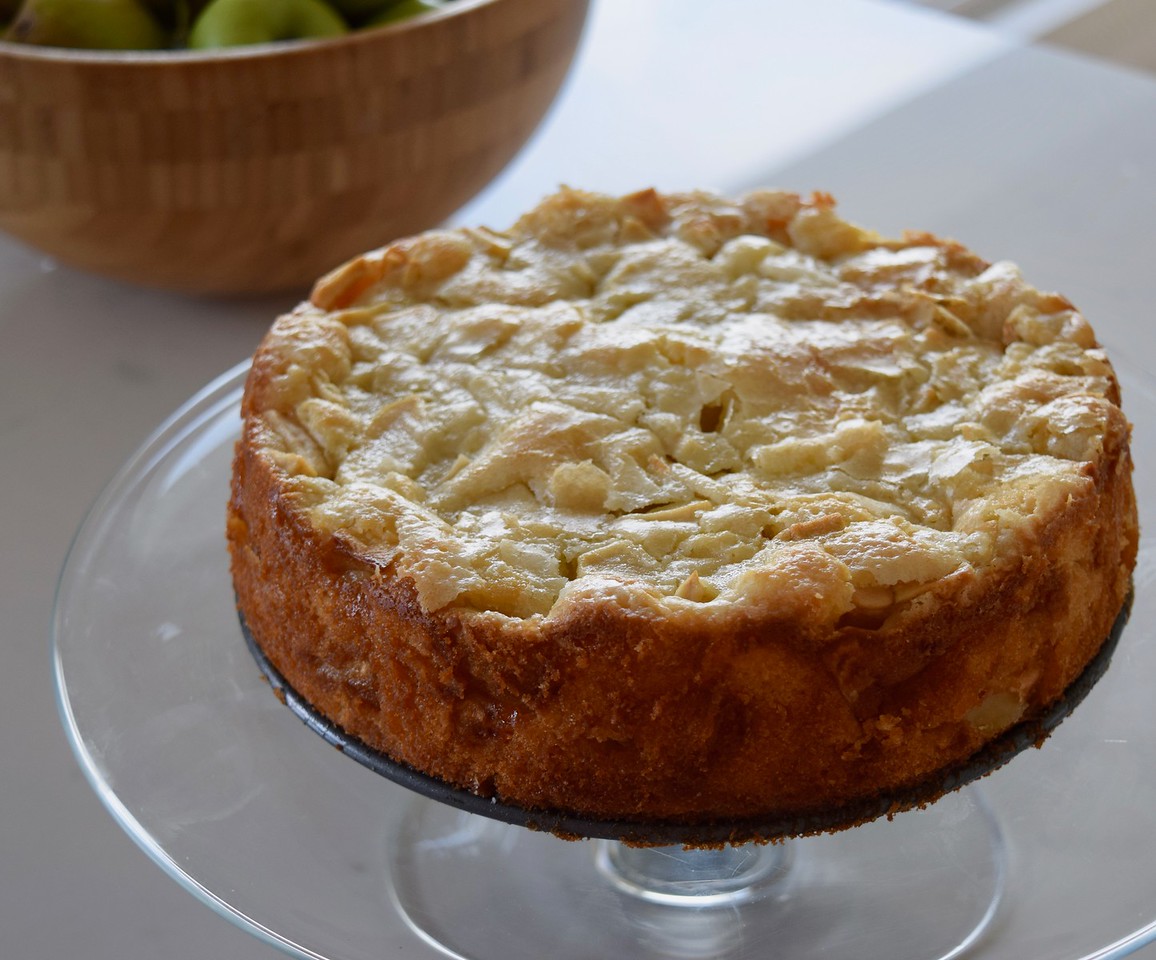 The recipe uses the very clever technique of briefly microwaving the cut apples and then allowing them to cool before folding them into the batter.  This helps move things along cooking wise and helps to keep the cheesecake-like interior..

We took giant wedges of these with us to see Gary Clark Jr. at the Hollywood Bowl.  And now, I’m back to working up my courage to go in for another 10-20 pounds.

While I’m generally a “you had me at almond” kind of girl, it was an unusual (at least to me) technique that drew me to this recipe.  Actually, two interesting techniques. 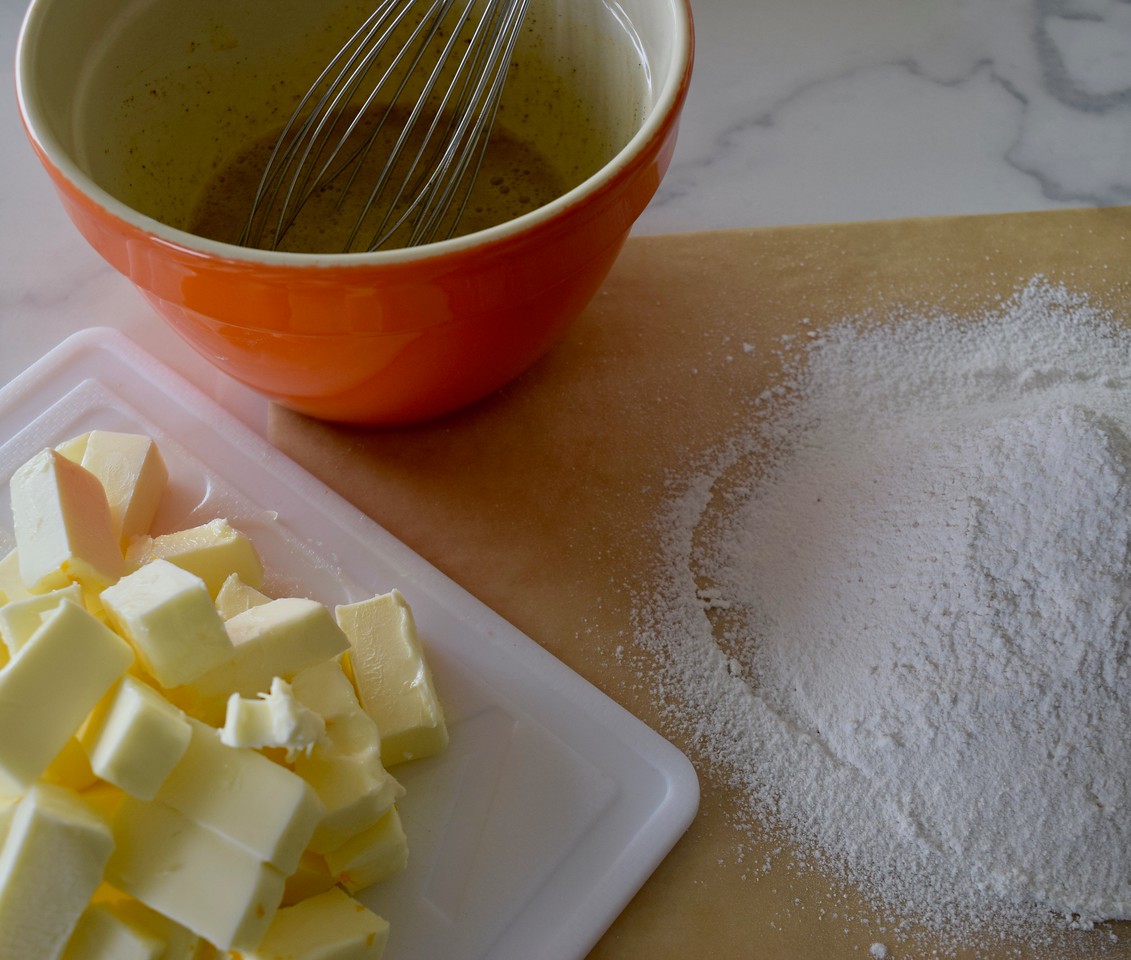 The first are the caramelized almonds that line the bottom of the pan (or in this iteration, pans).  As written, this cake is served upside-down with the topping on top.  However, since we’re making loaves, the sweet, crunchy almond topping becomes a sort of secret, surprise base. 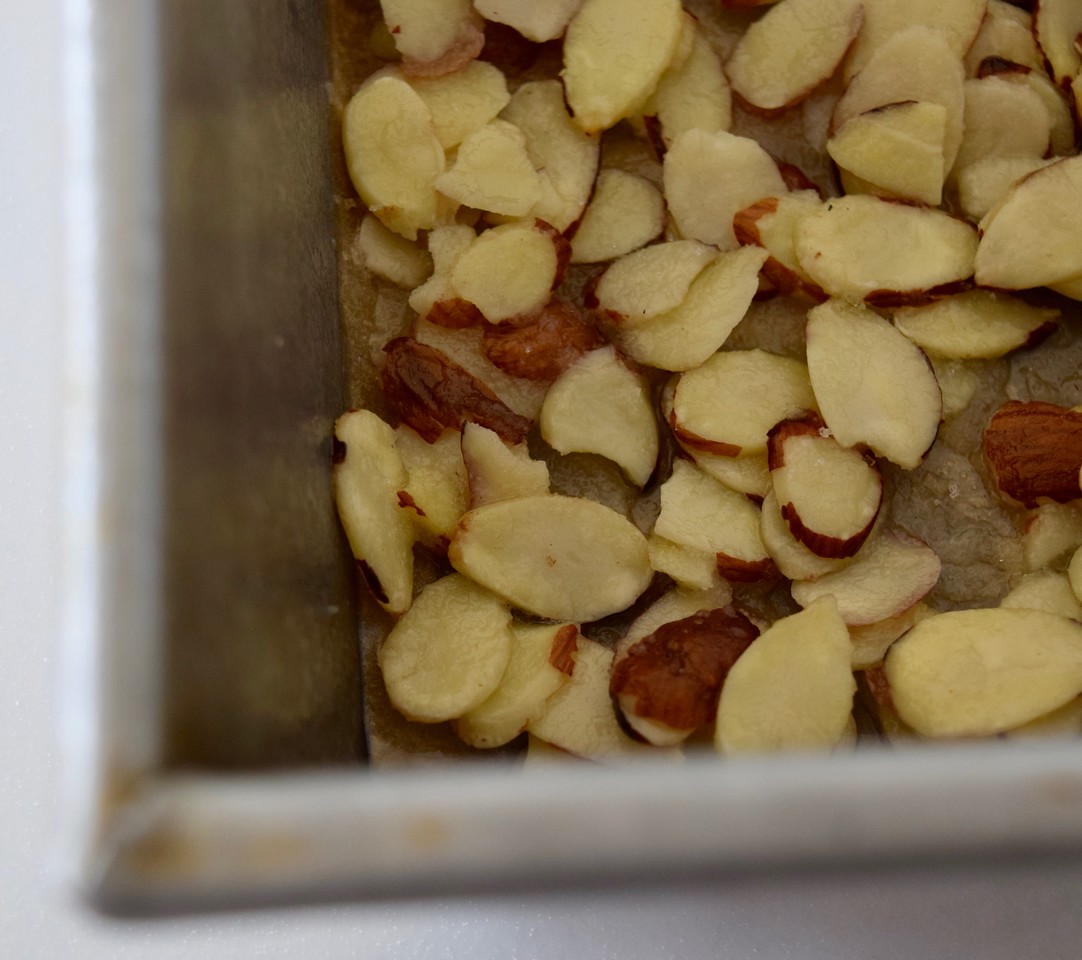 The second component that drew me in was the emulsification of almond paste, sugar and butter.

In a food processor no less.  The almond paste and sugar are processed into a delicious sand and then the butter is added, one little cube at a time.  As a note on the almond paste.  The recipe asks for 1 cup, or 9 1/2 ounces of almond paste.   Rooting around on Amazon, I kept finding 8 ounces packages.  I took a chance with the smaller amount (I wasn’t going to open a second expensive package for 1 1/2 ounces of paste if I could help it) and the almond flavor came through perfectly.

My slight twist adds the zest of a large orange because my taste buds kept telling me to.  Add it or don’t–whatever your tongue tells you to do.

This cake is delicious and exotic by flavor.  However, its the texture that really makes it special: delicate and crunchy at the edges but satisfyingly dense and moist in the middle.  It was definitely worth cleaning all those food processor pieces in the aftermath.

With the sweet crunchy almonds and gently spiced and almond crumb, the flavors are reminiscent of a bear claw or almond croissant. 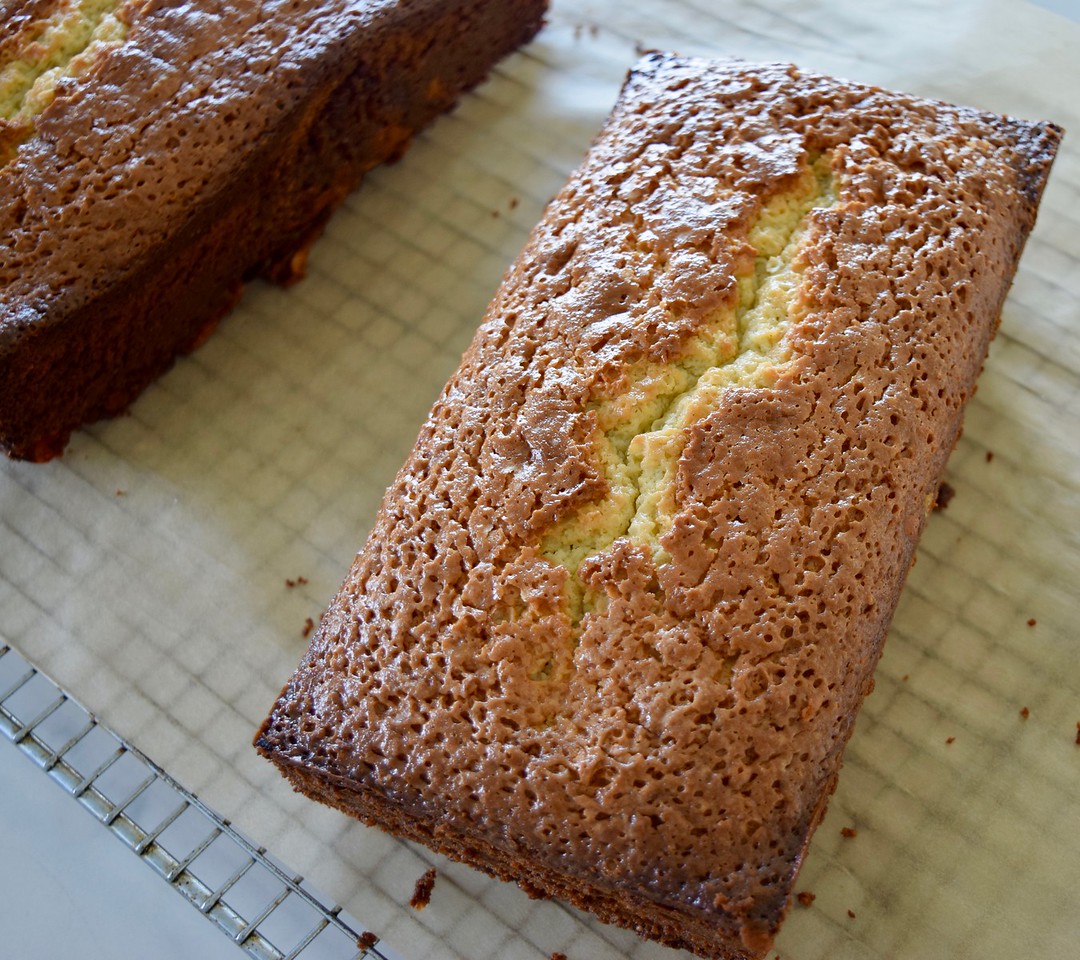 Only this can be kept in the freezer and brought out on demand.

As written, the cake is made into a 9X2 round pan.  I used two 9X5 inch loaf pans with good success.

for the almond topping (or bottom if making loaves)

TMH: I double wrapped and freezer bagged these and then froze them for a week and they defrosted really well. 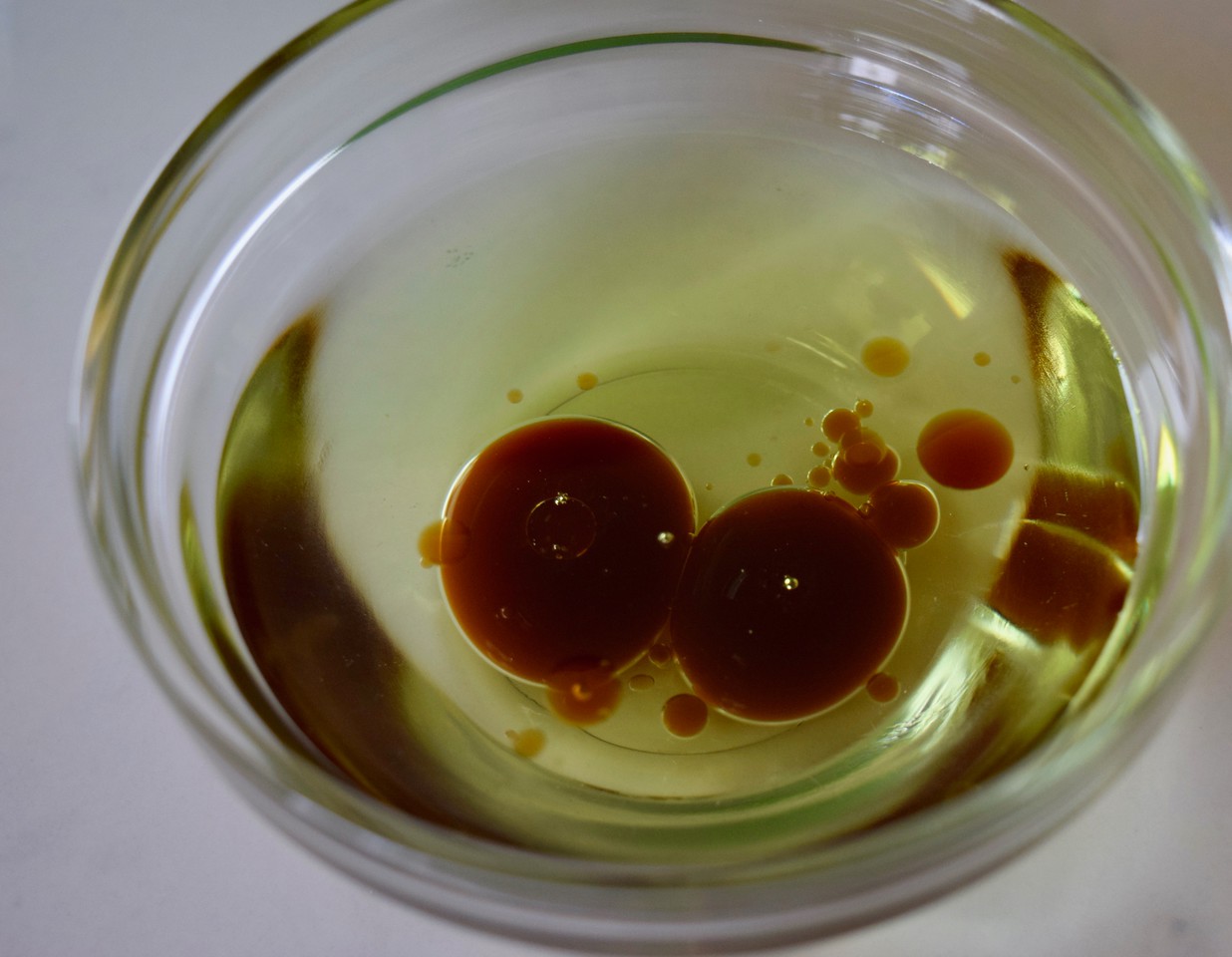 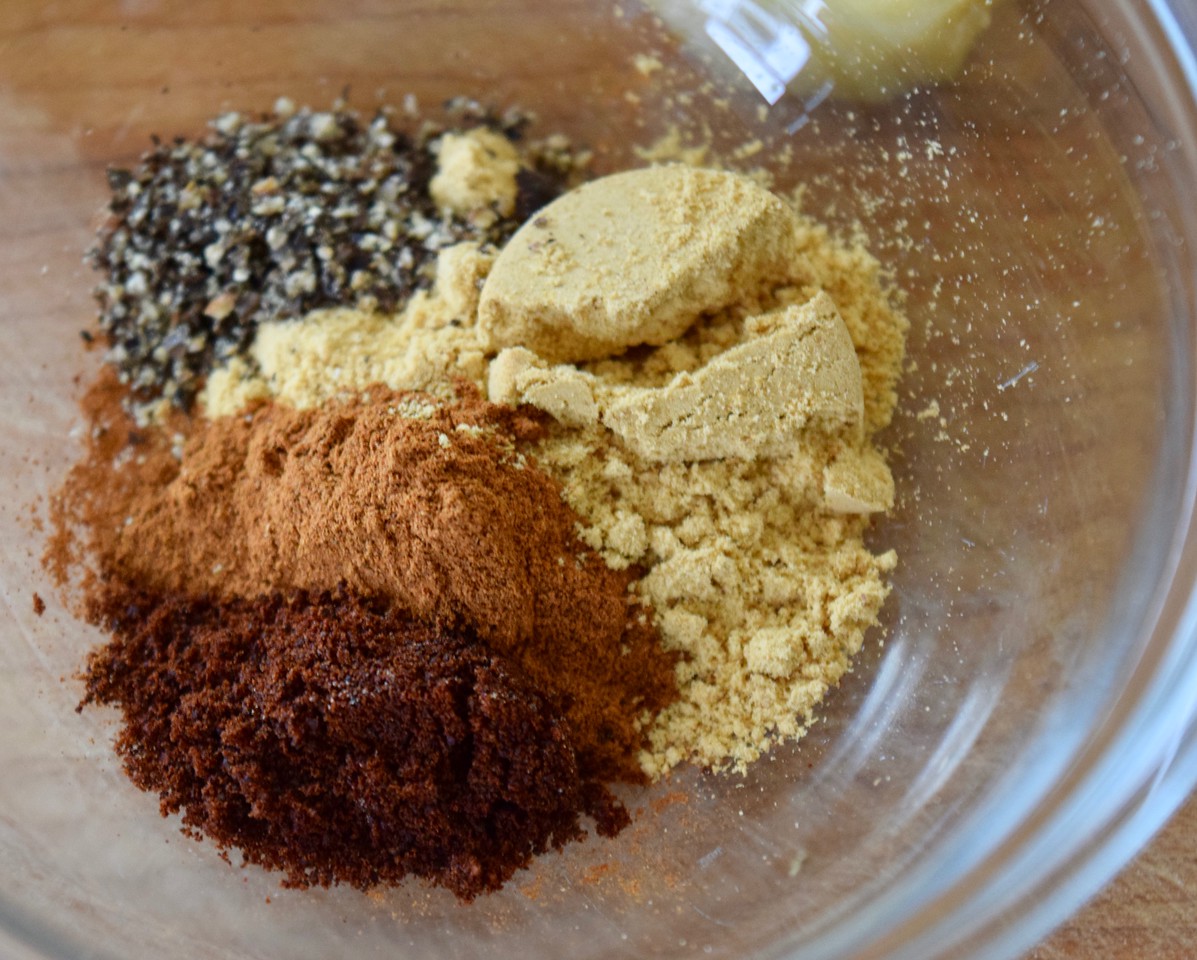 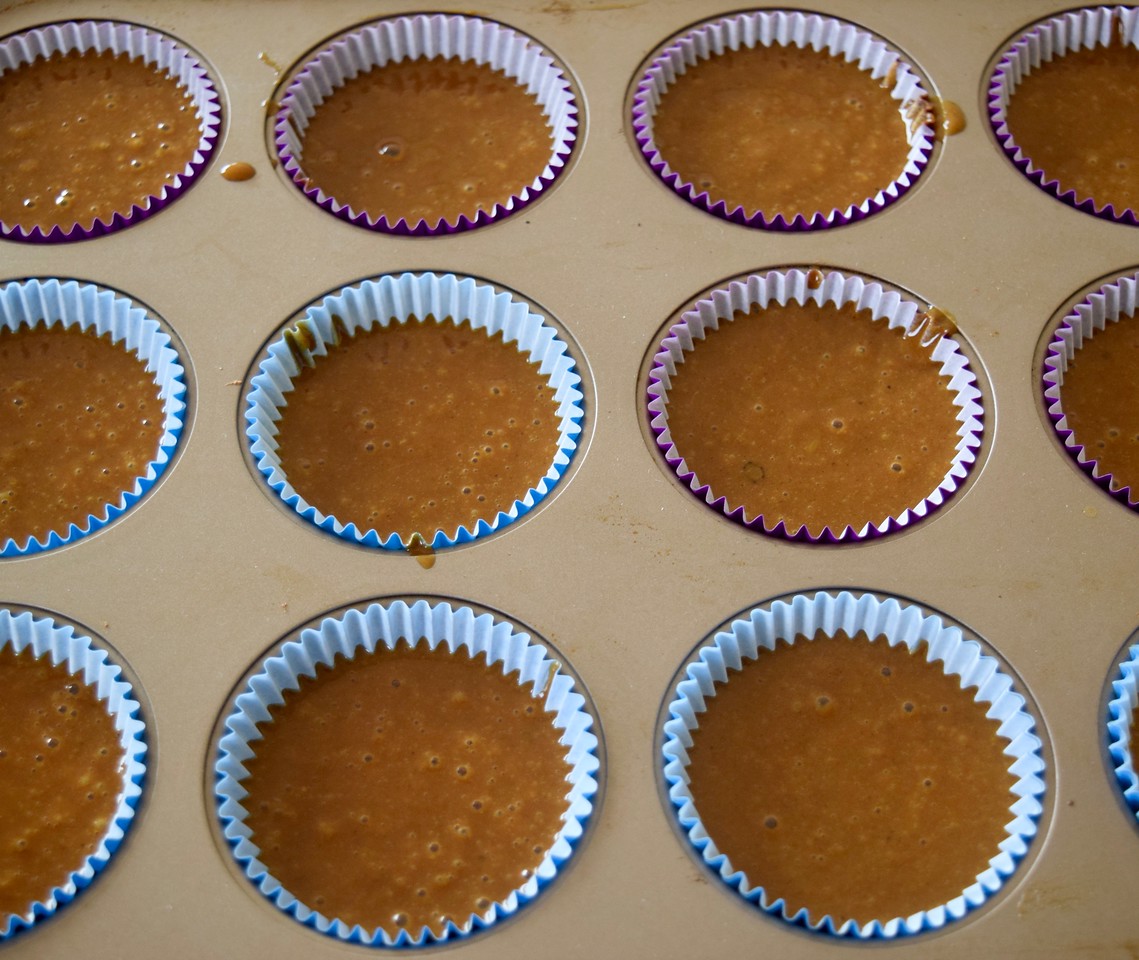 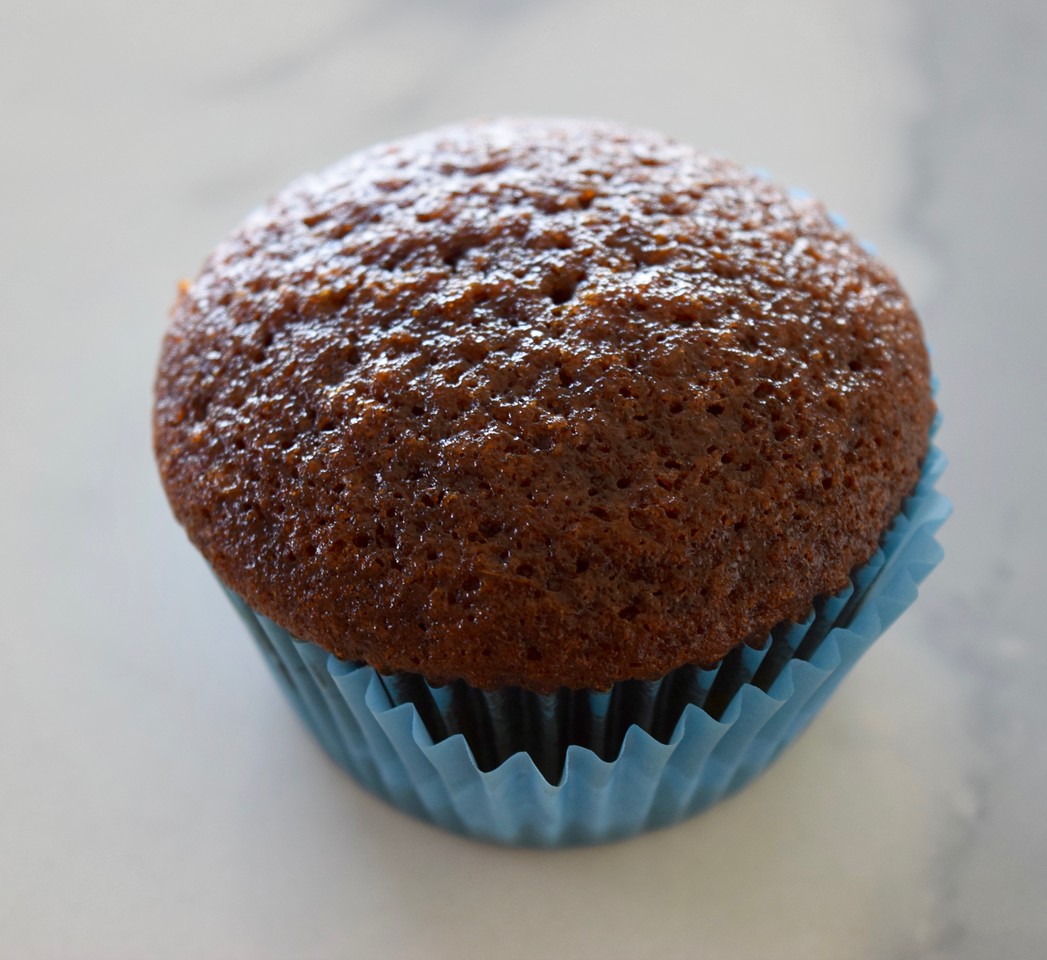