Before we get to the (baked) goods, I’d like to pause a moment and send out cosmic best wishes to John Wooden. The man, the institution, turns 98 today. Indeed, any of us could call ourselves successful if in our own lifetimes we were to accomplish and contribute just a fraction of what he has. I’m wearing Boilermaker colors today in his honor (wearing Bruin colors is difficult considering my current employer—black and old gold are considerably less incendiary in my office). Happy Birthday Mr. Wooden (if you don’t know what he looks like, John Woodern is the one in the picture above who isn’t Kareem Abdul-Jabbar).

With the crumbs finally cleared from the baby shower, I was able to turn my full attention to Royce this weekend. My goals were to test out the gingerbread recipe, test the integrity of the pattern and come up with an appropriate color and thickness for the pieces. While I didn’t have enough time to make the entire building, I did get through the front façade and wings.

Now remember, this is a prototype. I realize it looks like a fifth grader put it together (not to offend any fifth graders out there), but I am a learns-by-doing kind of girl.

I’d never actually made gingerbread until last weekend. Luckily, I’m a pretty thorough (read, compulsive) researcher and did quite a bit of legwork up front on finding a recipe. The one I settled on was posted in an article in a Midwestern newspaper. The author has been making gingerbread structures for years and this was her tried and true recipe. It was immediately attractive to me because the recipe itself has some interesting quirks that come about only after someone has utilized a recipe for a long, long time.

I was immediately pleased with the dough. It was strong and sturdy and incredibly easy to work with. I did have to halve the recipe in order to use the standing mixer (the full recipe calls for a whopping 12 cups of flour). In all, I made three half batches utilizing different pigments and washes to experiment with the brick effects. I felt quite a bit like Half-Head-Highlight Goldilocks looking for her cookie nirvana.

Here we have the front facade with the brick roller with the natural color of the gingerbread. Hmm…too bland. Much to the disappointment of my inner super sparkle princess, sanding sugar will probably not be appropriate in this instance. Too sparkly…definitely too sparkly. Then I tinted the dough and added an egg wash. Just right. I also (obviously) experimented with dough thickness and windows. I found that the thinner pieces immediately warped. So, thicker it is. I’ll also store the pieces flat with weights. In terms of windows, I forgot to buy hard candy to try out the stained glass effect, but was very pleased at how sturdy the pieces were even with cut-outs. I let the pieces set over night and then it was time to fit the pieces together. I kind of cheated and bought a commercial royal icing mix. Now I’ve made more royal icing than I’ve played super sparkle princess in my lifetime but I wanted to see if there was a difference between my own powdered sugar, egg white and cream of tartar recipe and the stuff the big guys use. The answer–heck if I know. They both work. When I put the real thing together, I’m definitely going to have to tint the stuff red.

Yeah, I know, we’re in trouble if there is a major catastrophe and we have to survive off our canned goods. And then, there was structure. I realize I have a long way to go–but man, I was just super excited that the thing went up.

Other stuff I learned:

**The t-square is my friend. This baby helped a lot with cutting and creating right angles in both the pre-and-post baking stages. I found that right out of the oven, it was easy to correct baking effects by re-cutting some of the edges using the t-square and pizza roller.

**We covered thickness. I think 1/4 is about right.

I need to figure out how to create the effect of the white brickwork. I definitely think it needs to be done post-baking and I have a couple of ideas. I also need to start thinking about the dreaded roofs–which may just blow the ceiling off of the whole project.

Unsure as I was about the efficiency of mail order baking supply companies, I wasn’t planning on actually making any gingerbread until later in September. So I was very surprised to find a box full of commercial royal icing mix, sanding sugar and my brick roller waiting for me yesterday evening. Of course I immediately unwrapped everything. The brick roller is really cool and really tiny…which means that there will be some testing this weekend.

I ordered this set of supplies from www.sugarcraft.com. This place has everything. It’s completely and totally overwhelming and I’m fairly certain that if you got locked in their warehouse for a couple of nights you could survive off of the fondant and sugar sprinkles.

I need to take the time here–before anything has been built–to provide disclosure of intent. I’m not an engineer or an architect or a contractor . Mention the words sine and cosine and my palms get a little clammy. The term tongue and groove makes me giggle. I’m also not a gingerbread purist. So, all you cookie snobs out there who expect me to construct this thing completely out of gingerbread and royal icing can just stop reading now. While I have the very best intentions (I do scour each month’s issue of Dwell after all), I also have no qualms about utilizing support structures to maintain the structural integrity of this baby. Foam blocks, tin foil and perhaps even chicken wire are all my friends. And, like any good friend, I plan to use, exploit and manipulate them accordingly. I do promise to keep things as edible as possible. But, at least in this builder’s case, I’m going to need all the help I can get. Seriously though. This weekend was project: see if the templates you pulled out of your ass actually fit together into a facsimile of Royce Hall.

After stocking up on some foam board, masking tape and new drafting rulers (I never pass up the opportunity to buy a new drafting ruler—I use them for everything from sewing to baking to actually measuring things), I was set to begin construction. Oh—have to give a shout-out to the Graph Aides art supply shop in Westchester. They were hopping on Saturday because the adjacent Otis Art School began classes today. Students were getting 20% off and since I live in the neighborhood and the owner guy recognized me, I got 20% off as well. Thanks artistic guy with equally artistic though geographically unidentifiable Latin accent!

It took me about two hours to measure and cut out the pieces. Let me just say that foam board is not as much fun to cut as I remember. Let me also just say that nothing gets me more in the holiday mood than cutting foam board in my 90 degree kitchen in August while sweat drips down my face. Evil as it is however, foam board is about the same thickness as gingerbread, so I didn’t have a choice. It took maybe another 30 minutes to construct the monstrosity (again, not including the roofs).

Here is what I came up with: Front view from side: This week I’m going to update my templates and begin cutting them out of tag board. Merry, merry!

For years I’ve had this fantasy of constructing UCLA’s Royce hall out of gingerbread. This year, I’m going to make it happen. AND, I’m going to blog about it here, in excruciating and illustrated detail, because that’s the kind of girl I am.

Why Royce Hall? Well, it’s only the iconic symbol of the institutionalization that represented the first eight years of my adult life. Huh? I went to UCLA. For a long time. Royce Hall is the building I fell in love with while on a college visit and it heavily influenced my decision to go to UCLA (I was 17 with the decision-making skills of a 17-year-old, pretty buildings were persuasive). Many moons later, I stood on the stage of Royce Hall and was hooded as a learned scholar. Most recently, on a cool fall evening, Royce Hall is where I saw Gandolf (Sir Ian McKellen) drop his pants and show off the family jewels in a production of King Lear. In my book, any place that would let me be a doctor (at least philosophically) and display a grown man’s junk is storied enough to be (temporarily) immortalized in baked good.

Let’s suspend disbelief and set aside the fact that I’ve never made anything out of gingerbread for a moment. I’ve spent some serious time with Legos and Lincoln logs—heck, I was like the diorama queen in the 4th grade. I’m also very enthusiastic. Enthusiasm is important. Besides, I’ve already ordered the brick stamper-roller. So, there is no going back now.

To set the mood I feel it appropriate to take a look at the grand dame herself. From the Front: 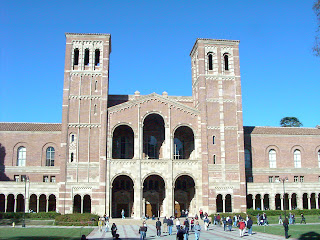 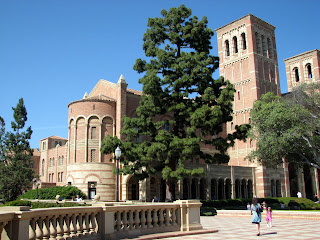 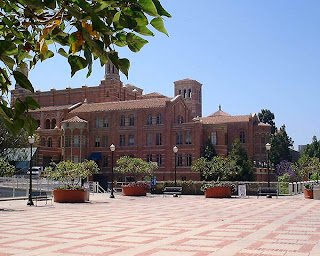 After significant design modifications and some fun with math, I came up with the following models (some of the diagram has been lost in translation). If my foam board modeling works out, my version will be 23” at its widest, 15” deep and 11” at its highest. By my count it will require 17 templates and 55 pieces (not counting the back tower detail or whatever shenanigans I can think up for the landscaping). This weekend my goal is to build this baby out of foam board.