When I travel I like to bring back a recipe or food idea native to the culture. From Venice came risotto. From France: Camembert. From Taiwan: mochi. So, when I was in Chile for work, I was on the look-out. Chile has great food and I had more than my share of beef, salmon (pronounced saLLmon) and wine of the Carmenere variety (somehow a case of it even followed me home).  But alas, I didn’t return particularly inspired to make something new. So, I’m admitting now, this recipe is a bit of a cop-out.

But before I move on, I have a picture viewing hint.  If you place your cursor over a picture you can click on it to enlarge.  When I was proofing this post the pictures looked really small so I thought I’d bring this little tidbit to your attention.

Dulce de leche is popular in many Latin American countries. It’s very rich, very good and almost impossible to mess-up. So, inspired by David Lebovitz’s own version, I bring you my not-particularly-creative but definitely good dulce de leche brownies.

Since I used my own brownie recipe http://www.tmhostess.com/2010/01/the-brownie-stands-alone/, let’s focus on the dulce de leche. Dulce de leche starts and ends with a single ingredient: sweetened condensed milk. Yep, that’s all (though if you are like me, you’ll add in a little kosher or sea salt).

I’ve come across three ways of making it, two of which I’ve tried, one I will detail here and the third will come next week. The first version involves placing an open can of the stuff in a pot filled with water (well, filled up to about an inch from the top of the milk can). Then you boil the water for about two hours, replacing the water as it turns to steam and stirring the milk occasionally. This worked well when I tried it. Apparently, this technique carries the risk of exploding cans of caramel that seems scares people away. The third version I’ve come across involves using a double boiler.

Here is the second version; credits to David Lebovitz.

Get out your roasting pan and a thick pie or baking dish (I like glass). Yes both; we’re going to bake via water bath. Now, add the sweetened condensed milk to the smaller pan (I used a 9X13 pan for my brownies so I used 2 14oz cans of milk). 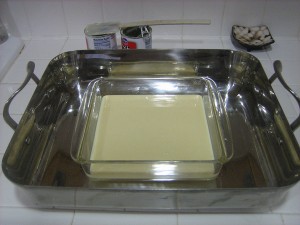 Before we move on, want to hear a cool story about South America? See the little dish up in the right-hand corner of the last picture? It’s wear I put my rings when I cook.  But that’s not the cool part.  My friend Melissa brought the dish back for me from her sabbatical trip to South America. While she was there she also met a boy, fell in love, got married, had the world’s cutest baby (seriously, the cutest) and now they all live in Buenos Aires Argentina.  That’s the cool part of the story.

Back to the dulce de leche.  Add about 3 inches of water to the roasting pan.

After you have created the water bath, carefully move whole operation into an oven pre-heated to 450 degrees (really, you should put it on a lower rack than I did). Remove from heat, stir et voila—you’ve got dulce de leche. Really, that’s all there is to it.

But here is the thing. Dulce de leche is very, very dangerous stuff to have around. At least if you are me. Which means fairly immediate re-purposing is required. In this case it involved brownies.

Let the dulce de leche cool to room temperature. While it is cooling, pull together your favorite brownie batter. I’ve linked to mine above.

Drag a knife through the first layer to spread the dulce de leche a bit. 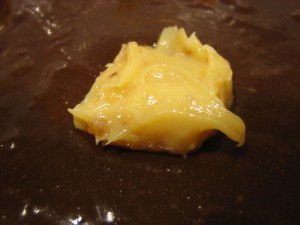 Next, pour the remaining batter over the spread caramel. Repeat the teaspoon and spreading action. Pretty isn’t it? 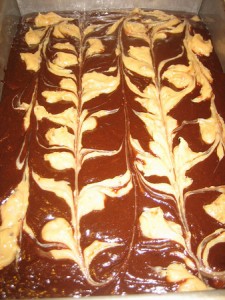 Now, into the oven. While you are waiting, pay your dues to Balu the kitchen god who watches every project with vigilance from the top of the refrigerator. 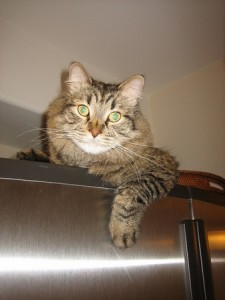 The brownies are even pretty when they come out of the oven.

Let the brownies cool completely. In fact, because of the sticky factor of the caramel, you may want to throw the brownies in the fridge over night before cutting.

And here, straight from Santiago Chile to you (and by straight, I mean completely circuitous and probably not even really related), I bring you the dulce de leche brownie. 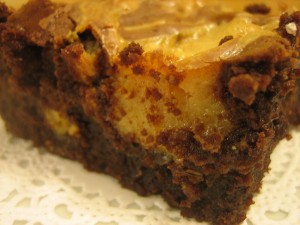 Preheat over to 450 degrees.

Pour milk into a smallish baking dish (a pie tin will do as well). Please smaller dish into a larger dish (I used a roasting pan). Fill roasting dish with about 3″ of water. Into the oven it goes. Check at about 30 minutes. Stir and then check at 5 minute intervals until caramel is the color of peanut butter (of course you could cook it more or less to taste). Let cool and store in the refrigerator.

This recipe is inspired by a key lime pie recipe from Williams Sonoma. I say inspired because I made so many changes to it that the recipe really is my own. For starters, I didn’t use key limes because I couldn’t find them. So, I guess the following is really a recipe for Persian lime squares with a white chocolate and pistachio streusel.

We’ll begin with the crust. Limes are pretty powerful little suckers; much more than lemons if you ask me. The pucker factor always has me attempting to balance out their tartness with other flavors. In this recipe, I started with the traditional graham cracker crust and to it added about a cup of shelled pistachios and a teaspoon of lime zest. Because, well, we all know how I feel about citrus zest. 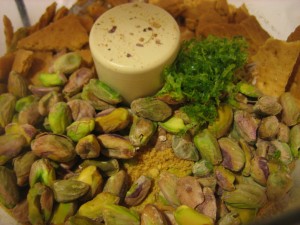 Pulse it all together in the food processor with some caster sugar until the ingredients resemble course sand. 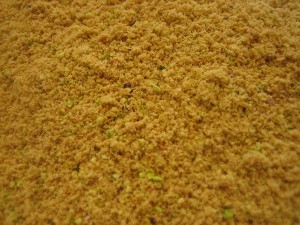 Add some melted butter, mix and press into a buttered 8” pan lined with parchment paper. I like to use the bottom of a measuring cup to pack down the crust. Now, into the oven it goes. 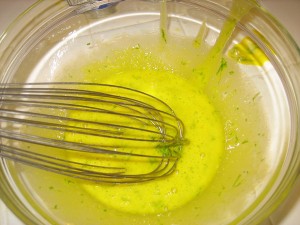 About now the crust should be ready. Add the custard to the crust (unlike my lemon tart recipe, this custard will already be thick and should settle easily into the pan). And back into the oven. 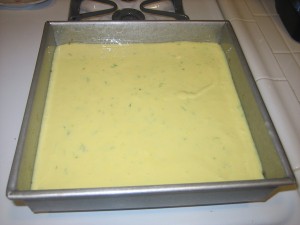 It’s done when the custard no longer jiggles.

Now, you could stop here and let the bars rest in the fridge for two or three hours. But, remember my need to balance-out the tartness of the lime? I have one more flavor to add: white chocolate. Using the grind setting on your food processor, grind together about four ounces of white chocolate with another half cup or so of shelled pistachios (okay, I’ll come clean here, I didn’t do the pistachio part because I was running late, needed to get the bars into the fridge and so didn’t take the time to shell additional pistachios. Just pretend they are there).

Sprinkle the streusel over the still warm bars and THEN into the fridge for at least three hours (really, this is better done over night). Once the bars are chilled, carefully cut into squares. 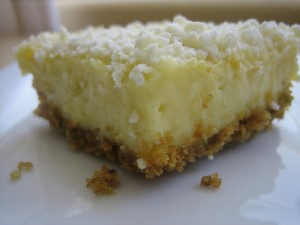 Preheat oven to 350 degrees. Butter and line with parchment paper an 8” baking pan. In a food processor grind graham crackers. Add in pistachios, sugar and lime zest. Grind until mixture resembles course sand. Remove to a medium bowl and add melted butter. Combine until mixture resembles wet sand and butter is uniformly combined throughout. Press mixture into prepared pan and bake for 5-10 minutes.

In large bowl, whisk together egg yolks and lime zest. Whisk- in condensed milk and lime juice. When crust is browned, carefully add custard mixture and return to the over for 25-30 minutes or until custard sets up.

In food processor, grind together white chocolate and pistachios until both ingredients are to desired size. Once the custard mixture comes out of the oven, sprinkle streusel on top and immediately refrigerate for at least three hours. Cut, and enjoy.