A couple of years ago my immediate family descended on our favorite spot in Maui to celebrate my mom’s 70th  birthday.

At the time, my nephew was two, full of energy and ready to take on the gentle surf of the Napili Bay.

One afternoon post naps and just as the sun had shifted enough to cool things down a bit, my nephew co-opted my husband into some kind of bizarre leg-race to the water’s edge.  As far as I could tell the activity consisted of one of them yelling “on your marks, get set, go” which was followed by a race to the water whereupon TD would unceremoniously belly-flop into the incoming tide.

As with most things two-year-old related, once was not enough and the two repeated this for the better part of half an hour.

Among other things, including a sand rash and sore calf muscles, this little shore activity earned TD the nickname of Crazy Uncle Tom.

Two-year-olds: they call them as they see them.

I stumbled across a recipe for what claimed to be the world’s best cake.  Of course had to try it out for TD’s birthday.  It’s kind of a love child between banana cream pie and mild spice cake.  There is sponge.  There is meringue. There is toasted coconut and creamy banana.  There is vanilla bean speckled whipped cream.   It’s crazy–just like Crazy Uncle Tom.

As far as being the world’s best cake.  Well.  It’s kind of like when Buddy the Elf takes Jovie to try the World’s Best Cup of Coffee.  Enthusiasm and joie de vivre outweigh actual caliber but it doesn’t matter.

How about tahini in bar form?

With added currants (or just about any dried, chopped fruit), these bars are a cross between a peanut butter cookie and a fig newton.  They’re dense, nutty, soft and chewy.

AND, they’re even better when eaten frozen.  Full disclosure: I feel the same way about white grocery store birthday cake and those Lofthouse cookies with the icing and sprinkles on top so, consider the source.

It’s pretty embarrassing that until today, this blog did not have a recipe for Irish soda bread.  My Irish ancestors (because we all have them) are probably tipping over on their heavenly bar stools.

I can’t quite figure out why I’ve never posted a recipe for Irish soda bread.  This bread is quick (literally), fun to make and is ridiculous as toast with butter and a drizzle of honey.

Soda bread itself isn’t actually Irish.   I read that Native Americans were making a version of this bread long before sodium bicarbonate was introduced to Ireland in the mid-nineteenth century.  As luck would have it, the type of wheat that grew in Ireland was more responsive to baking soda as a leavening agent than yeast and so became the favored method for bread baking.

Folklore says it that the cross was cut into the top in order to ward off the devil.

In our neighborhood,  the Goodyear serves the same purpose and he was flying laps around the house as I was baking this bread.  Unlike soda bread, the Goodyear Blimp’s leavening agent is helium and a lot of hot air (and cheerleaders).

Though there are many variations on Irish soda bread, I’ve gone with a currant, orange zest and sour cream version here (sometimes called a spotted dog) mostly because I had sour cream in the fridge.

While we’re on the subject, happy St. Patrick’s Day to all.  I often find myself on other continents for the grand celebration of green beer.  This year I’m in Beijing but in other years I have celebrated from Taipei and Hong Kong.  One year I was even at the source in Dublin.

borrowed from All Recipes

I was obsessed with that song (via Resevoir Dogs, not in the original) for a summer in between my junior and senior year of  college.

College was a confusing time for me musically.  And don’t get me started on the fashion.

Dorie Greenspan’s new cookie book has an entire section on sables.  This tropical, crunchy, citrusy version was the first one I made under the guise of  attempting to heat our open to the elements house in late December.

There are few smells better than the aroma of toasting coconut.

For these and a host of other recipes in her book, Dorie uses a baking technique that involves muffin tins.  When I made this recipe, all of my muffin tins were in storage and so I  used the roll, slice and bake method here.

I should be reunited with my muffin tins (why does this sound like code?) later this month.  When the time comes, I’ll be sure to play with the technique and share the results.

We went into escrow on Via Corona a year ago today. It’s also TD’s birthday.  Happy birthday TD.

We are so close.  Based on my project worksheets, all the big tasks are complete. And yet, as they say, the devil is in the details — and boy do we have details.  Lots of sanding and painting, grouting here and there, face plates, some hardware installation, a ton of cleaning and caulk, caulk, caulk!  Kibbles and bits, odds and ends, nooks and crannies. We’d be very glad to call it a day in the next three weeks.  Realistically though, I’m guessing this will drag on for another six or so.

Either way, a moving van with everything that’s been living in storage since 2015 shows up on March 24th.  Ready or not.  This will be the fourth time we’ve hired movers in the last two years.  Our moving team knows us by name and vice versa.  Not a joke.

In the meantime, allow me to show you some pictures of mostly done stuff.

In the living room we have a “necessity is the mother of invention” situation that turned out pretty well.  In order to bring our 50 year-old lady up to code, the city required not one but two headers (one in the old space, one in the new).  The ceiling height (or lack thereof) meant the headers had to be exposed.  It looked a little odd, but luckily our builder came up with a brainstorm that made lemons out of lemonade.  Or fed mayonnaise to the tuna fish if you prefer.  We added a couple of additional beams and some trim and voila, it’s a coffered ceiling effect.

Last weekend was the first time we could stand in the Southeast-most corner of the house and look out to the Northwest.  The feat sounds trivial but it was kind of a big deal for us. 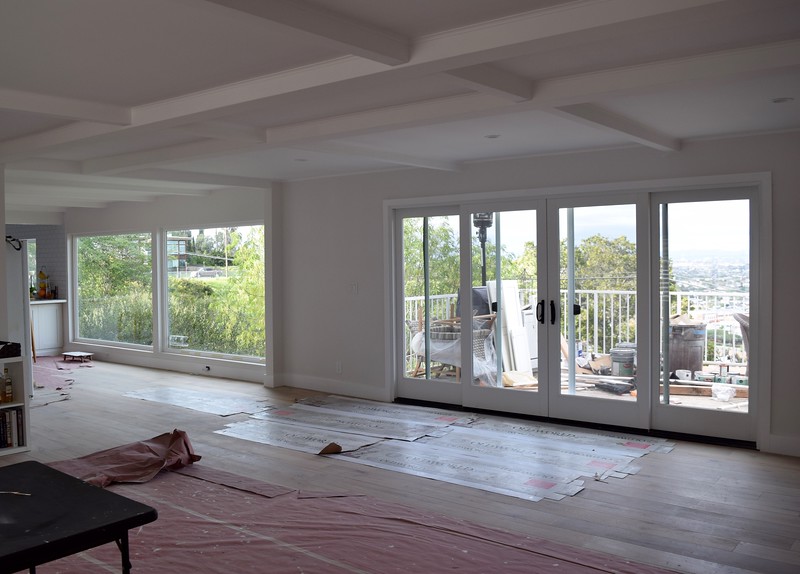 As you can sorta see, the deck remains a disaster.  Once the crew finishes up, and because we enjoy pushing the outer boundaries of our marital union, TD and I are going to strip and refinish the railings and decking.  We hope this will hold us until we’re ready to have the deck completely rebuilt.

You may have heard the “Drought Buster” rains we’ve had this year were the largest in recorded human history (unless they’re not).  The immediate aftermath also caused a bit of a neighborhood drama.  Namely, our hill ever so slightly slid into the street.   The mud in the photo is probably a foot deep.  There’s a tarp on the hill right now and no fewer than 12 neighbors and city officials have harrumphed extensively while “surveying” the “damage”.  Theories and opinions on the subject range from the ridiculous (“It’s an illegal drainage cover up!”) to the sublime (“It’s private property, we want nothing to do with it.”)  After weeks spent rending garments and gnashing teeth, supposedly there is a solution afoot.  Once we’re informed of what that actual solution is, the Via Corona I-Team will be sure to bring you the details.

Although it’s not quite complete in this picture, the shiny fireplace has become one of my favorite features in the house.  This makes me think that instead of spending hours and hours and hours researching all the finishes I should have just thrown darts at options and gone from there.  Live and learn.

In a project of this magnitude priorities are essential, and so the singular piece of furniture currently taking up space downstairs is committed to booze storage.  Someday this well-traveled Ikea relic will give way to a nicer alcohol storage system, but for now we’ll rely on the trusty Kallax to get us through (although this one is so old it may be an Expedit!)  For the record, that joke kills at Ikea conventions. 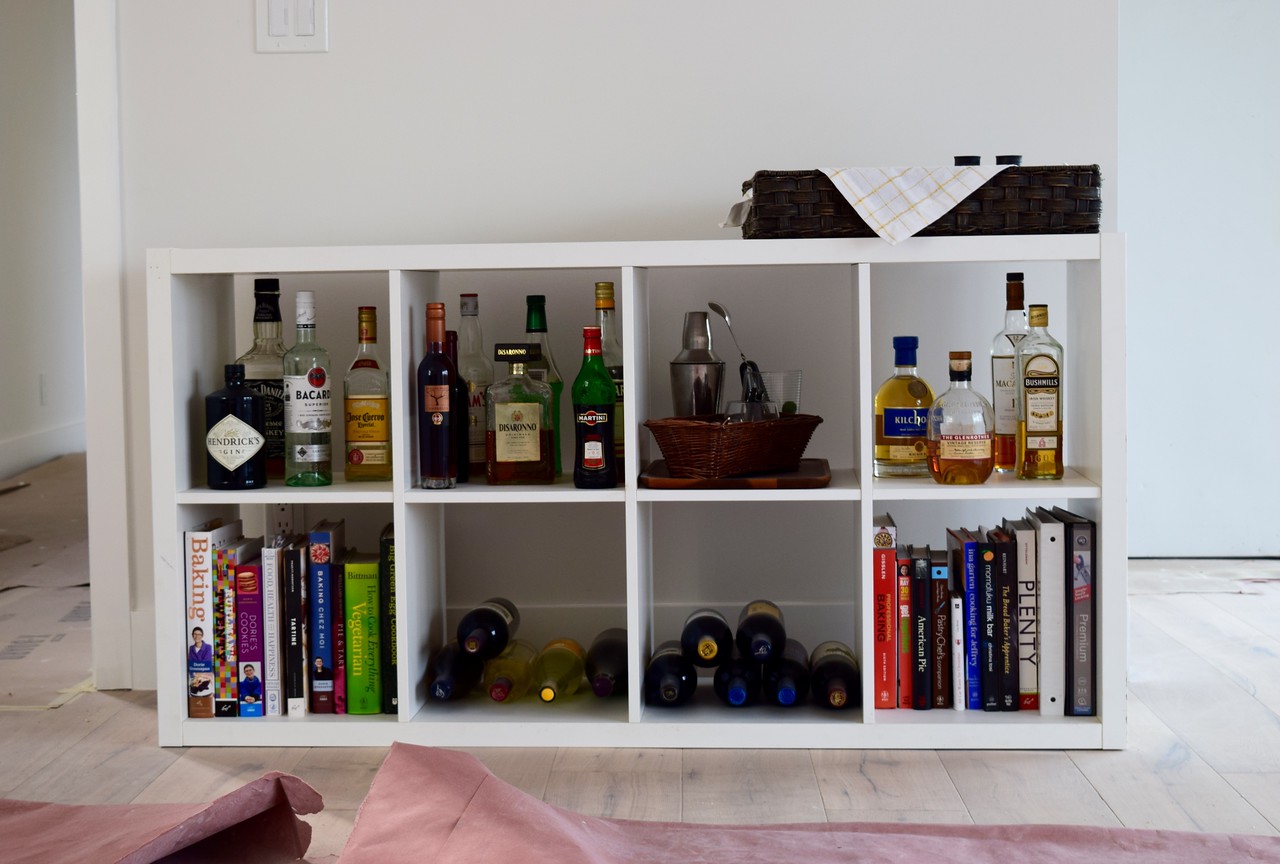 Via Corona is starting to shape up on the outside as well.  She’s painted and stuccoed (all in Cool December if you’ll recall).  We finally have exterior lights,well, two of the three…the third light has somehow disappeared since arriving in early November.  I guess we should call ourselves lucky if this is the only collateral damage other than the microwave mishap that TD still can’t bring himself to talk about.

All that’s left to do on the outside is the detail trim above the door and bay window and, of course, mailbox installation.  Someday we’ll give the remaining 1/3 of the house a fresh coat of paint, but today isn’t the day for that and tomorrow isn’t looking good either. [TD here–Shannon won’t let me go up on the roof which makes a DIY paint attempt difficult.  Luckily she’s going out of town for a week or so.  That third of the house might just get painted.  I may also fall off an die.  Either way she wins: a completely painted house if I live, no need to ruin one of the 1,000 pillows on the bed by smothering me if I die.] 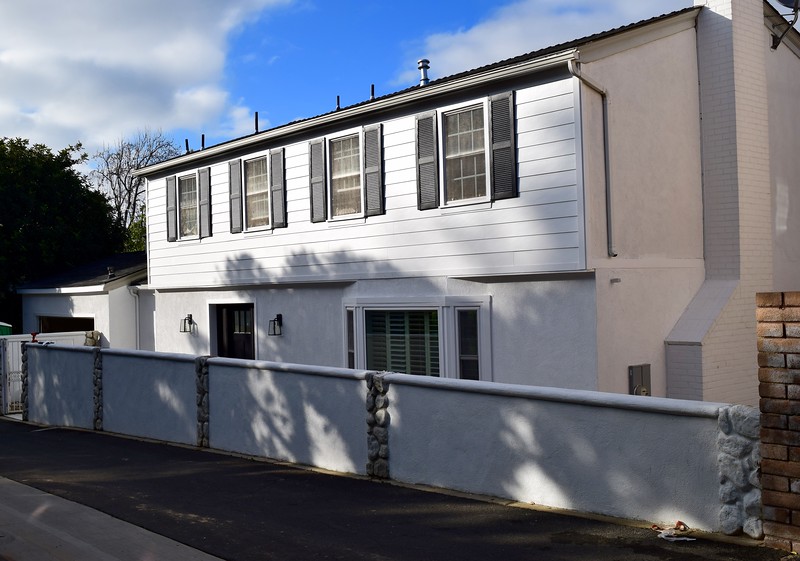 Last weekend we installed the the house numbers plaque.  Well, TD installed the numbers while I made quick work of removing the rusty gate.  As with most endeavors involving the two of us and home improvement, the activity was not without an element of danger.  I disassembled the 200 lb. (rough estimate) gate without incident.  However just as I removed the iron casing strip that the gate locked into, a large, scary and most likely hairy spider crawled out from the underside.  In a reaction that can only be describe as girly, I screamed and flailed my way through the “get the spider off me dance.”  In my haste to relocate the venomous (no doubt) creature, I indiscriminately threw the heavy metal piece directly at TD.  Luckily for us both, I missed.  Still, one or both of us might have wet our pants a little.

We promise we’re building up to an interminable series of reveal posts soon . . . and none of this season-ending cliffhanger nonsense.  Hopefully the finished product will be worth the time, money, effort, blood, sweat and tears we’ve spent living it and you’ve spent reading about it.  We’re looking forward to tearful reunions with furniture and clothing we haven’t seen in 15 months and, of course, getting to the part where we make the house a home (Note:  Probably also alcohol-related).

Until we move-in near the end of the month, Instagram (@TMHostess) will be the best source for Via Corona updates.  Posts for the next three weeks will all be recipes;  I’ll be in China for work and TD will be too busy re-living his bachelor days with generous helpings of fast food, movies he’s seen a million times already, salmon patties and wall-to-wall coverage of the NCAA Tournament.