I think Kate Spade has been stalking The MisanthropicHostess.

Will bake for handbags, shoes, small leather goods and jewelry.

When it comes to dessert and baking, I generally think of myself as a less-is-more kind of girl.  I don’t believe that an extra layer of frosting, nuts, foam, candies or a trip to the deep fryer automatically makes something better.

But, every once in a while, I like to get a little crazy.  And this is one of those times.  Plus, the recipe includes the element of fire…which really…who can resist?

We’ll start with a loafed version of butter cake.

The batter is thick and rich going into the oven.

Golden brown and dense coming out.

And usually, this is where I stop.  On its own, this loaf cake is pretty wonderful.  It has a nice dense crumb and would be delightful paired with a cup of coffee and some fresh berries.  I like to make loaves like this and freeze them.  I have an as-yet-to-be-realized fantasy that someone will stop by unannounced and that I’ll serve them some nice cake and iced tea.  You know what the reality of this little fantasy is?  A freezer full of cake.

Every time I clean out the freezer (which is quarterly because, well, I’m  me), I am always delightfully surprised with at least two or three full or nearly so bottles of the stuff.   I think what happens is that  be planning a get together, I’ll look in the bar, see no vodka, think we are out of it, then buy more and stuff it in the freezer.  And then, I repeat the whole thing the next time people are coming over.

Perhaps there is a cake and vodka party in our near future.  But, I digress.

So, if you aren’t serving your butter cake with a shot of vodka, you could cut it lengthwise like so.

And whip up some eggs whites and sugar into a stiff meringue as such.

Then, cover the layer cake with a nice thick white blanket of fluffiness.

A little toasty toasty under the broiler.  Or better yet, get out the butane torch.

And you’ve got yourself a completely over-the-top lemon meringue cake.

Jimmy Buffet.  I thought this might be a parrothead worthy recipe.

Over the holidays the Kitchen Gods had two very special visitors in the form of fiver-year-old twin boys, Nathan and Zachary.  There was running and pouncing and jumping and some nip.  And then after the Kitchen Gods were exhausted in 10 minutes (they are cats after all), we all went to the beach (well, not the Kitchen Gods).  This visit gave me an excuse to finally make a cookie recipe I had been saving for some time: langues de chats.  Langue de chats translates into cat’s tongues and I found the recipe once upon a time while looking for a way to use the bag of Belgian peal sugar I had sitting in my pantry.  The cookie is very simple and very easy to make.

A little butter, salt, eggs whites, flour and vanilla are all combined and then the batter gets chilled for half an hour or so.

And then piped-out onto a baking sheet.

Sprinkle with pearl sugar, or don’t, either way, these cookies are a perfect little favor for spending some time with the Kitchen Gods.

And of, course, no actual cat’s tongues are required. A few posts ago I made an indirect reference to a famous quote allegdly spoken by Marie Antoinette: let them eat cake.  I knew at the time that this saying was of dubious origin, and even dubious existence. But, it fit my theme and so I exercised my own creative license.  Whether Jean-Jacques Roussea, the author who claimed that Marie said what she said was telling the truth, the literal translation from French is actually: let them eat brioche.

So, not only did I mis-attribute a quote, but I misquoated the quote (well, the English language mis-interpreted the quote, I’m simply guilty by association).  To make amends for my own historical transgressions, I sentenced myself to an attempt at baking brioche.

In The Bread Bakers Apprentice, author and bread baker extraordinaire provides three brioche recipes of increasing “richness.”  Playing the role of a typical American, I chose the middle-class recipe.  Less butter but also (supposedly) easier to work with.

As a yeast levaned bread, brioche begins with a sponge: a little flour, some yeast and a little warm milk.

Which, if you make the middle-class version as I did, gets a slightly extended fermentation time of 30-45 minutes.

While your yeast is getting its feast on (see what I did there?),  the remaining ingredients get assembled: eggs, more bread flour, a little sugar, a little salt and, oh yeah, that which makes brioche, brioche–butter.

After  sponge has risen and falls (see the second picture), eggs are added.  If you are a rock star this can be done by hand.  Apparently I’m more of an easy listening girl and used the paddle attachment and a standing mixer.

In go the dry ingredients.

And finally, the butter, two tablespoons at a time. Reinhart describes the dough at this stage as smooth and soft.  Well, mine was that, but it was also alarmingly sticky.  Into a greased dish, covered tightly and then rested in the fridge overnight.

When ready to make the bread, remove the dough from the fridge.  The first time I attempted to make brioche, I stopped here. After 12 hours of cooling and arrested fermentation time, the dough lost none of its stickiness.  And, when I attempt to roll-it, much of the dough stuck to my hands.  Thinking I failed, I tossed the whole thing out.  And started again.

The second time around, the dough came out the same.  So, I liberally dusted my hands with flour and then took a stab.  Ahha!  Success.  I decided to make briohes a tete (why yes, this does translate to how it looks).  Reinhart suggests that the mold be filled no more than half, so I made one to appropriate size, weighed it and then weighed-out the dough accordingly.  This recipe will make 12-16 1 1/2-2 ounces brioche a tetes.  My molds were smaller so the batch made about 2 dozen.  The idea is to work with cold dough.  So, either quickly form your balls or put the dough in the fridge and work in batches.

The tops get a misting of oil and then are covered loosely in plastic wrap where they proof for an additional 1 1/2 to 2 hours or until the almost fill the mold. Next comes a gentle egg wash and another 15-20 minutes of proofing.

Then, they finally go into a hot (400 degree) oven for 15-20 minutes until dark golden brown.  The rolls should sound hollow when thumped on the bottom.

They’re pretty in the mold but will stand up just as well naked.

While a true pastry chef would probably laugh at  the texture (the pockets should be larger), I don’t think it’s too shabby for a first try.  Let them eat cake, I’ll take this brioche. 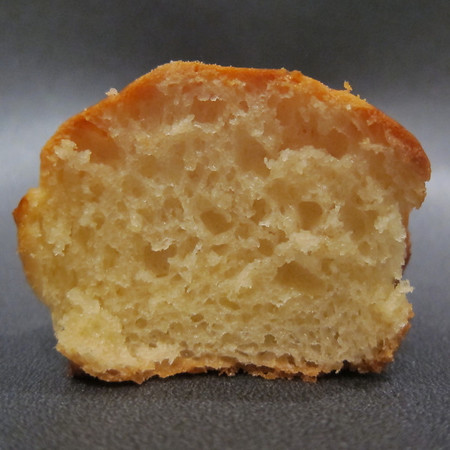 Wilco with Billy Bragg. California Stars reminds me of camping in the middle of the summer…a nice little bit of nostalgia for the middle of winter.

The month of January has always reminded me of grapefruit.  Never mind the fact that these global citrus beauties are in-season and criminally inexpensive at the grocery.  For me, the smell of grapefruit is the smell of a new year.  It is bright and lively but also slightly bitter and undeveloped around the edges…like something waiting to unfold.  The scent is a promise that the darkest part of the year is behind us and, if we wait patiently (well, in Southern California, we need be less patient that in other locals) new and delicate things wait just around the corner.

Which is why I thought it appropriate to start the year out with a triple grapefruit treat.

We’ll start with some candied grapefruit peel.  Unlike the heartier orange peels I made for the holidays, these are fine and curly.  For this, I braved my complicated and rather abusive relationship with the citrus zester.  Every time I use this baby, it asks for a piece of flesh as payment.  And this time was no different.

It also means that they emerge from their final syrup bath a bit like tangled spagetti.

These would be difficult to dip in chocolate, but the results are sculptural and perfect for the purposes at hand

Next up: ruby red grapefruit curd. I’ve made citrus curd utilizing both a stainless saucepan as well as the non-stick variety.  For curd, where continuous whisking is a necessity, I have to admit that I prefer a non-stick pan.  It seems to temper the heat a little better and reduce the opportunity for burned curd.

And now on to the cake portion of this goodie.  Angel food cake is always fun to make and while I generally associate this confection with April and strawberries, I thought the texture would be perfect for what I had in mind.

Glossy and stiff egg whites are gently combined during the final steps along with a little grapefruit zest for good measure.

Airy and light you wouldn’t think something that went into the oven looking like this.

And now it’s time for the grapefruit hokey pokey.  Each little cake gets a divot.

That is filled with curd.

Then topped by a simple grapefruit icing and accessorized with candied grapefruit peel. This is going to sound odd, but by the time I have planned-for, made and cleaned-up after whatever it is I’ve created, I’m generally not all that interested in eating it.  This is generally where TD comes in.  But.  I did taste these.

For photographic purposes of course.  And was really surprised at how lovely they are.  When baked, grapefruit mellows-out and can become very subtle.  So, the triple (well, quadruple) effect isn’t overpowering.  My tastebuds also enjoyed the contrast of textures and flavor tones (good lord…did I just say that?)–creamy, springy, crunchy, sweet and puckery.