You knew I was going to say the kitchen right?

Of all the rooms in Via Corona, the kitchen was the most updated and functional.  We seriously considered simply resurfacing her: changing out the appliances, countertops,  backsplash and calling it a day.

Except.  Except that darn cooktop

If you look closely at the picture below you’ll see that the cooktop is right in the middle of the peninsula.  While the size of the kitchen and the storage were fine, that five burner interruption meant the counter space was terrible.   Making matters worse was the box and exhaust fan the mortgage company required us to install directly above the cooktop before closing on the loan.  Goodbye line of sight if we wanted to keep the smoke detectors from going off every time someone fried an egg.

And then we completely lost our minds and decided that a rational multi-phase project over several years was silly when we could simply drain our savings and have it done all at once.  It didn’t hurt that when we were making this decision, the market was pretty volatile.  We figured Via Corona  was probably as sound of a place to invest as any other.

Unlike the cramped bathrooms and too-small living space, the kitchen already had a lot going for it.  First, the size was right relative to the scale of the house.  As we’ve mentioned, the finished space will be just over 2,000 square feet with only about half of that as living space.  Including the kitchen.  While we’ll steal a little from the powder room, we’re basically keeping it the same size.

Renovated, Via Corona’s dimensions will be about 13 by 12 feet.  Shocked?  Well, you know what they say, it’s not the size of the kitchen, it’s the placement of the spacement.

And to that spacement I said challenge accepted!  First, it meant I could totally ignore the open-shelving and no-uppers trend that’s so popular with kitchens right now.  Please, do any of those people actually ever cook in their kitchens?   With that out of the way I spent hours with my inventory of kitchen items (yep, nerd alert) and my trusty graph paper.  Buckminster Fuller couldn’t have planned that space any more efficiently (well, actually he could and would have but, you know).  By deepening the peninsula, we’ll gain some super sneaky storage–and counter space.  And then there is Via Corona’s secret weapon:  a reconfigured laundry room.  The laundry room will get its own blog post but the outcome will be a 6X8 space with an appliance garage and  butler’s pantry storage–in addition to the laundry.

Another thing going for the kitchen space?  The light.  You all know I spend a lot of time in the kitchen.  Having natural light is a luxury.  What’s more, because of the angle of the house (and a generally persistent marine layer), the light is diffuse.  There’s lots of it but not a lot of shadows or glare.

And there there’s the view.  Were going to trim that tree. Who doesn’t want to look out over the City of Angeles or catch a glimpse of the Pacific while doing the dishes? 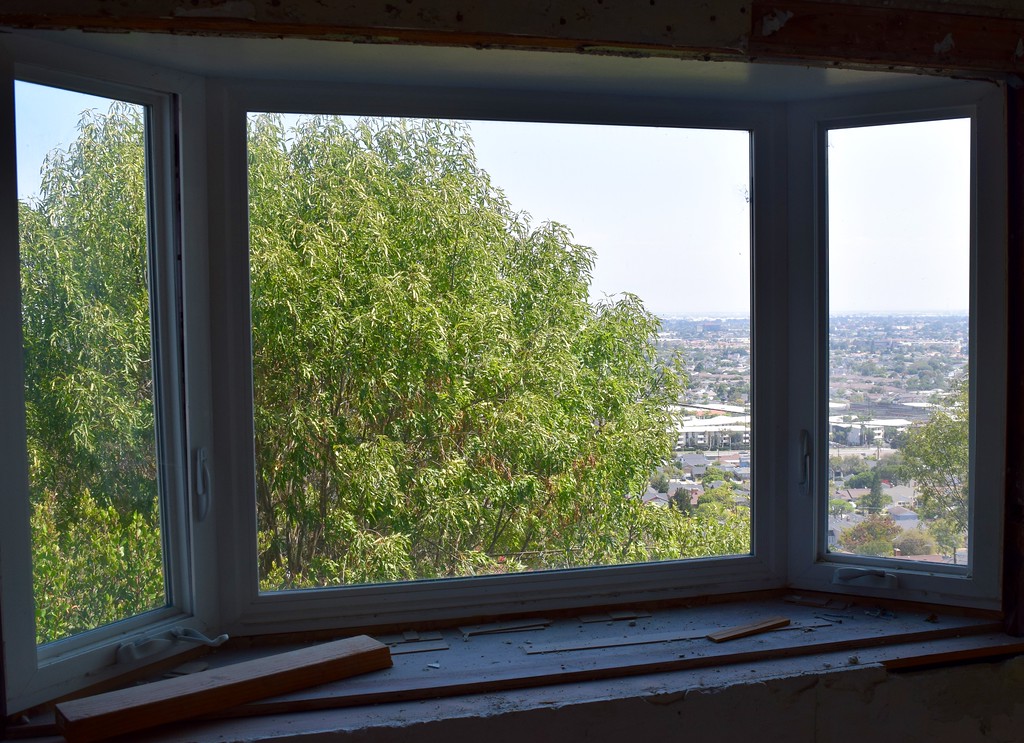 So let’s talk appliances.  Designing my own kitchen is probably a once in a lifetime opportunity.  But, because we’re basically replacing everything in the entire house, blowing the kitchen budget could mean we spend the next few years with an unfinished addition or…heaven forbid…no walk-in master closet.  It was clear from the start that my friends Subzero and Wolf would not be playing starring roles in Via Corona’s command center.

Which didn’t bother me a bit.  Know why?  Have you seen the kitchen I worked in for nine years?

The photo above is with the new appliances we had installed right before the mini-renovation, right before we sold the place.  For the first eight of those nine years, I worked with builder’s grade appliances to what I would argue were pretty decent results.

That’s four burners and a single oven (and two turntables and a microphone).

Knowing that we wouldn’t be going fancy for every appliance, I focused on need and performance.  Here were my parameters:

In the name of research, TD and I spent a very enjoyable afternoon at Pirch in Costa Mesa (I may have gone back on my own while TD was traveling just to spend some quality time in shower testing room).  If you are looking for a Japanese ice maker for your shower, this is the place to go.  If you easily suffer from cool stuff you can’t afford envy, it isn’t.

We also took no fewer than half a dozen “scouting” trips to Pacific Sales.  And the internets research?  Have you met me?  I’d start with Consumer Reports and then vet their recommendations against any and all other reviews I could find.   When all was said and done I ended up with the United Colors of Benetton in terms of kitchen appliance brands.  Each one is different. And each one better kick some appliance ass.

Second only to our wedding, ordering those appliances might have been the happiest 20 minutes of my life.  So far.

Now lets talk design.  Via Corona’s kitchen was always going to be white.  In fact, any kitchen  in any house we purchased whether West Mesa Way or Vicksuburg Avenue or 91st Street was going to be white. Don’t get me wrong, I love the painted cabinet look that is so popular right now.  I recently saw a kitchen with kelly green cabinets that made me weak in the knees.  But,  kind of like my secret desire to have a nose ring, while I admire it,  it’s just not me.  So, white cabinets. Appliances in stainless.  White subway back splash in a bisque finish with a light grey grout.  Black hardware. 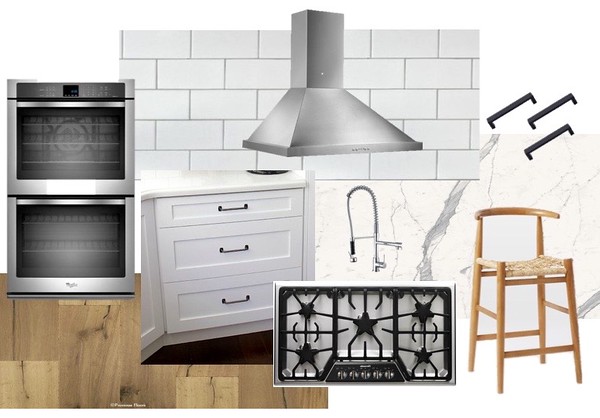 Before you label Via Corona’s kitchen milquetoast, take a gander at her counter tops.

They’re an Italian slab porcelain in  bianco venato extra.  Really, you should click on the link to get the full effect.  And seriously, who doesn’t want a little Italian in the kitchen?  Before meeting bianco venato extra, I hadn’t considered  porcelain for the countertops.  In fact, I was completely committed to some form of quartz or quartzite or caesarstone before I walked into Cosmos and went all hearty eyes for this Italian stallion (you knew that was coming).  While I’ve always associated porcelain with tile, the slabs measure something like 60X120 inches making the countertops  a continuous surface–no grout (except when joining the slabs–just like granite or marble).  Apparently, porcelain slab is kind of like frosted mini wheats.  On the practical (wheatie) side, it is heat and scratch resistant, more durable than granite and non-porous.  On the delicious icing side, it’s, well, delicious.

At this editing (first weekend in September), Via Corona’s kitchen remains the empty space you see above–minus the toilet.  Or, maybe it’s still there and we’ve just grown accustomed to seeing it.   We’ve finalized the kitchen design and ordered the appliances, tile and counter tops…so rumor has it that some day soon she’ll be a reality.

And then, no pastry will be safe from the Misanthropic Hostess.

Want to read more about our renovation adventures? Go here: Via Corona