I’ve begun to think renovating Via Corona is like running a marathon (or driving to Vegas).  While the distance has been long and we’ve endured considerable chafing in parts I won’t mention, our attitudes for the first 21 miles (in this case, first 8 months) have been mostly chipper.  If our builders are to be believed (eeeehhhhh?), we’ve just rounded the corner on mile 22.  Or as runners call it: the wall.  The downstairs is currently a disaster:  I can see the guts of the fireplace (and the accompanying spider webs), the protection cardboard covering the hardwood has been on the floor so long its begun to curl up at the (no longer taped) edges and there is so much dust everywhere that everything looks like its been run through an instagram filter.  We may only have four miles…or four weeks to go but it’s the cruelest distance.  So, this week I’m sharing something that’s pretty close to being finito: the guest bath.  All sources are listed at the bottom of the post.

As you might recall from the plans, this gem of a washroom sits at the top of the stairs and it is meant to be shared by the three non-master bedrooms.

At move-in, this bathroom offered an array of charming attributes including wall-to-wall carpet, an extra low vanity (with white fixtures), and a front and center commode.

One of the main reasons for getting ourselves into this mess was so that we could have a comfortable place for guests to stay when coming from afar: foreign countries, other states and the occasional nomad from the valley or Pasadena.

With this in mind, we basically flipped the entire layout so the main guest bedroom had direct access. Before I show you the goods, one word from the war-torn.  If you are renovating and can avoid it, you don’t want to move around your plumbing.  It is shockingly expensive. You could almost get in an entire renovation without moving the plumbing for what it will cost to move the plumbing alone.  We learned this lesson not once, but twice.  We are nothing if not committed to our own folly.

Because design inspiration had to come from somewhere, I started with the floors.  As I explained in the plans post for this room, I originally wanted Moroccan fish scale tiles.  However, unless I wanted to make my own, the mermaid scales  were very much out of my budget.  Honed marble herringbone isn’t a bad compromise if you ask me.  I paired this with polished white subway tile and brushed stainless fixtures.  But then I got tired of all that stainless and threw in some brass (sadly, it wasn’t from Tijuana.  But, we are going to have a sound system where you can play Tijuana Brass while in the bathroom if it’s any consolation).

While the result is significantly more feminine and…pink…than I imagined, it’s a pretty decent improvement over what was.

The once shower-nook now provides tidy access from the guest bedroom (and a more discreet potty locale).

Like every other room in this house, the space is just a little tight.  We’ll warn guests about closing the door completely before using the privy if they don’t want to get hit in the knees with it.

The main compromise (other than the flooring) was the loss of vanity geography.  In retrospect, I wish we had pushed the builder a little harder to do a custom vanity and gain a few inches.  I’m not in love with this fixture, though changing  knobs helped. I think the full-scale shaker styling on the smaller piece makes it look clumsy and I should have gone with plain-fronted drawers.  Oh well, too late to go back. 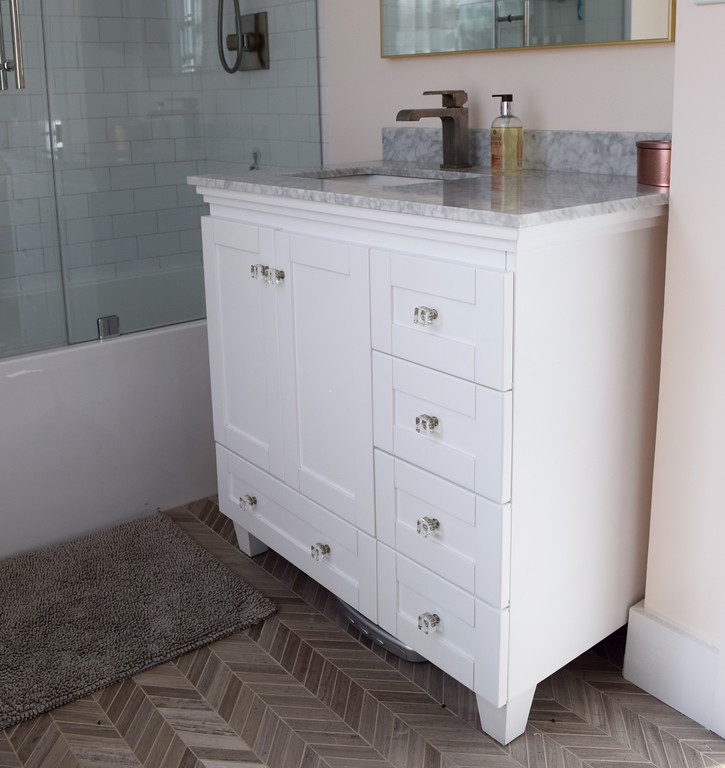 The good news is that while a petite 36 inches, there is plenty of space to do bathroom things.  Even when one or both Kitchen Gods are supervising (which is most of the time). 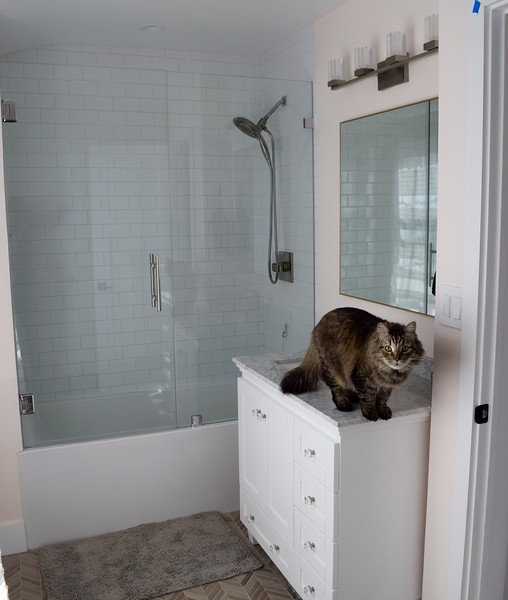 When we first started this project, I was naive to the number of bits and baubles required for a bathroom.  From TP holders to sconces, bathrooms have got to be the most accessorized rooms in the house.  I will say I am particularly fond of this little lighting find.  No one will ever notice (or care), but it matches the curtain rod exactly.  When I first found the piece it was way out of my price range.  But I dug around the interwebs enough to not only find it in my budget but also snag free shipping. Alas, victories like this were few with Via Corona.

After site-stalking these hooks for weeks, I finally pulled the trigger and ordered a couple.  I loved the look of one but not the other.  This resulted in trips to five different Anthropolgie locations to find just the right agates (I’m pretty sure it’s really resin but am not going to look too closely).  Yes, someone has control issues. 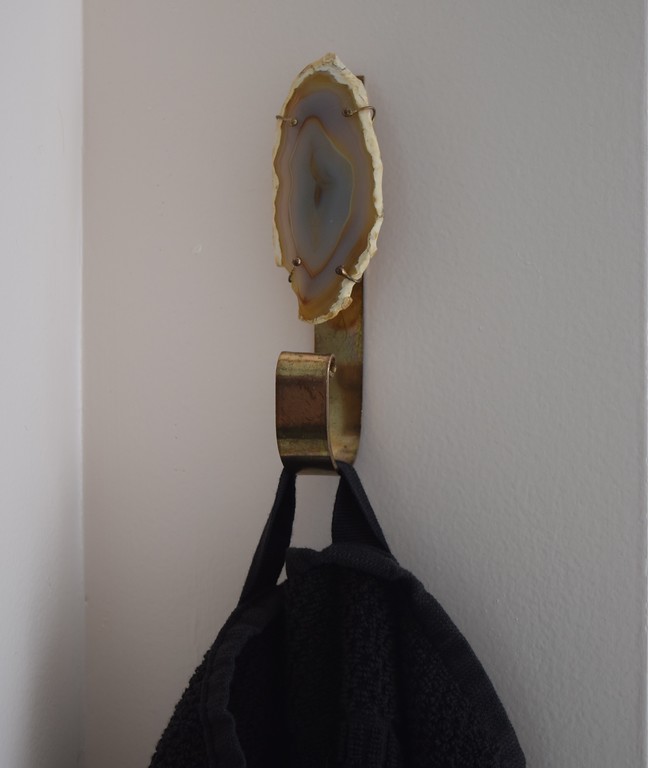 Though we’re lucky to have natural light in this bathroom, the window is inconveniently placed (unless you want to recreate Amsterdam’s red light district at home–if so, we’ve got a house we’d like to sell you).  For now I’ve hung a curtain that provides coverage but still lets in the light.  This is actually the third curtain I’ve tried out in this space which makes me think drapery may not be what this window needs.  Alas, I’m out of inspirational steam and so this will have to do, pig, until we come up with a better solution. 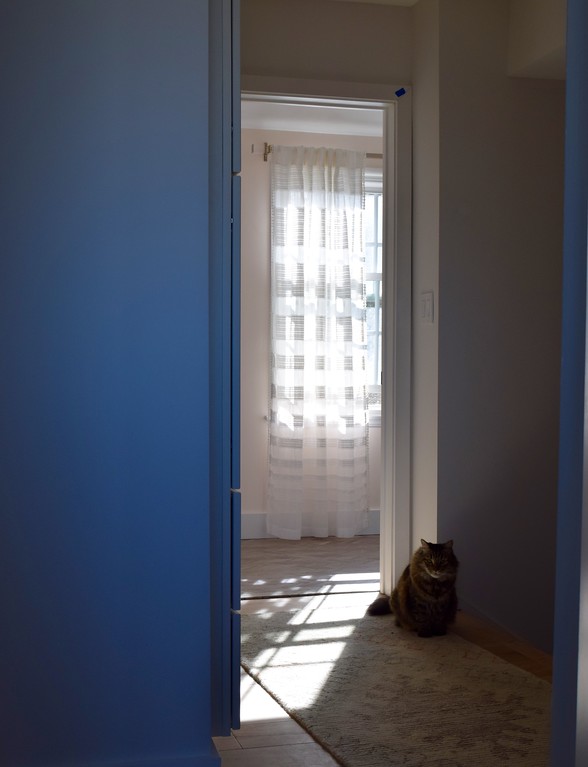 This room is still missing a piece of art–but that’s in storage and who knows when it’ll be liberated.  Maybe I can start thinking about it when we hit mile 24 and are suddenly inspired with a last burst of home renovation energy.

Wanna see some bathroom guts? This is a slowish loader because I don’t know how to  crunch it…I apologize in advance.