TD here.  If I were Santiago, the haggard Cuban Fisherman in The Old Man and the Sea, Via Corona’s entryway would be my giant marlin (only with a much happier, less Hemingwayesque ending).

It’s said you never get a second chance to make a first impression.  While this may be true in job interviews, dating or armed robbery, it thankfully does not apply to the reveal of Via Corona’s least appealing original feature — the entryway.

Call it an entryway, a foyer, an anteroom or even a narthex, there was no doubt it was a problem.  A big one.  Or should I say a short one?  When we purchased Via Corona, the entryway ceiling stood a claustrophobia-inducing 6 feet 11 inches high.  Likely not a concern for the previous owner since he stood all of 5’3″, but when you’re 6’2″ it feels like the sky is falling.  If you don’t believe me, hold a personal-sized pizza box vertically over your head and imagine that’s where the ceiling is.  I’ll wait. 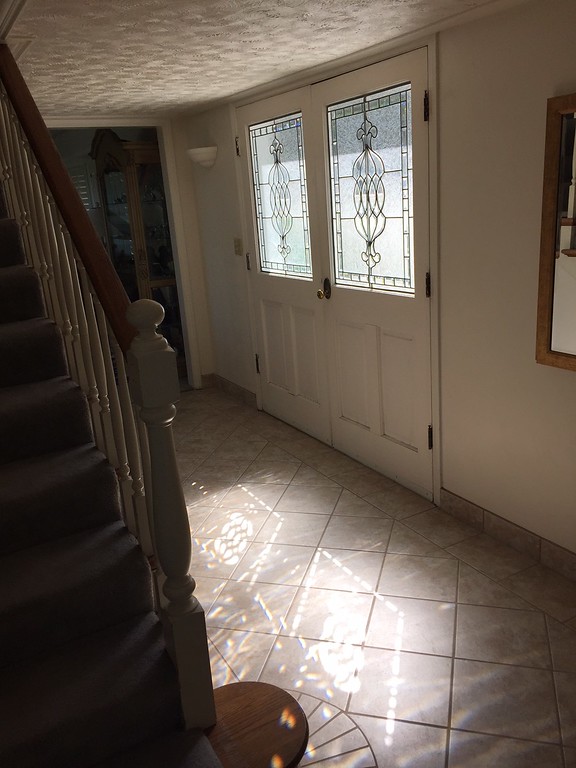 True fact:  No one is sure who is actually responsible for the “never get a second chance” line.  Some attribute the quote to Oscar Wilde.  Others trace its use to a Botany Suits ad from 1966 (the same year Via Corona was built).  The majority claim Will Rogers turned the phrase.  Rogers also reportedly said, “I never met a man I didn’t like” thus proving he never met the previous owner of the house.

The ceiling wasn’t the only problem with the foyer, just the most glaring.  Honorable mentions go to the “Liberace’s pool house” double front doors and the creepy staircase complete with “end of life” carpeting and railings nearly a foot lower than the modern code.

Then there was our lady with the urn.

Earning the title of Worst Original Feature in a place like Via Corona is a bit like being the Cleveland Browns starting QB, World’s Greatest Mime or the biggest hit by Nickelback.  You’re the best of a bad lot.  A distinction without a difference.  So even before we chiseled rocks off the side of the house or destroyed the mantel, I dreamed of bashing this atrocity to smithereens.

With all due respect to Heaven, Via Corona is the place where dreams come true.

I felt like the end result was about a 100% improvement as-is.  Fortunately Shannon assured me we could rebuild him.  Make him better than he was.  Better.  Stronger.  Faster.

The first move was to raise the ceiling to a normal height and install LED lights.   Here you can see how much difference a foot can make.  We couldn’t raise the ceiling in front of the powder/ stairs for structural reasons–but this was the height of the entire ceiling when we started out.  Sadly, doing this went a long way in destroying the haunted house vibe the previous owners had cultivated so spectacularly.  Everything is a compromise. 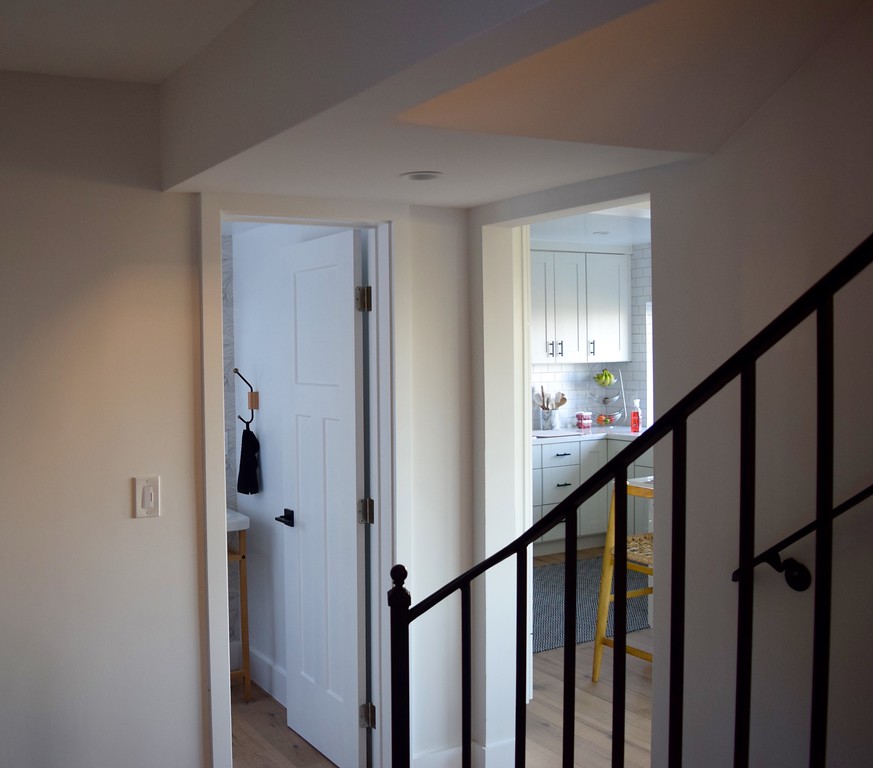 We also installed a single front door with operable, screened sidelights.  [SF here] Via Corona sits on a corner with the front door facing South. Due to this and some other weather and location related stuff we don’t understand, the breeze runs South-to-North.  By adding the sidelights we created an air flow straight through the house that should make up for the fact that we don’t have AC.  We hope.

We ran hardwood down the stairs and had iron railings made to bring everything up to code for this century.

The coat closet to the left is now a quite inviting home for our in-house wine storage (not to be confused with Garage Wine).  While we don’t have photographic evidence, the before looked like Jame Gumb’s basement in Silence of the Lambs.  Go ahead and look that up if you need to.

See that air vent at the end of the hall?  It was at ceiling height before.  After we raised the roof, it wasn’t.  So we had it moved-up at a cost equal to a year’s supply of foot long subs (this is where the builders get you–all the little bits and pieces here and there).  We also installed a wireless doorbell that plays 50 different songs — each  more annoying than the last!  I thought it would be funny to have “Memory” from Cats be our doorbell song.  It’s not.  Not even a little bit. 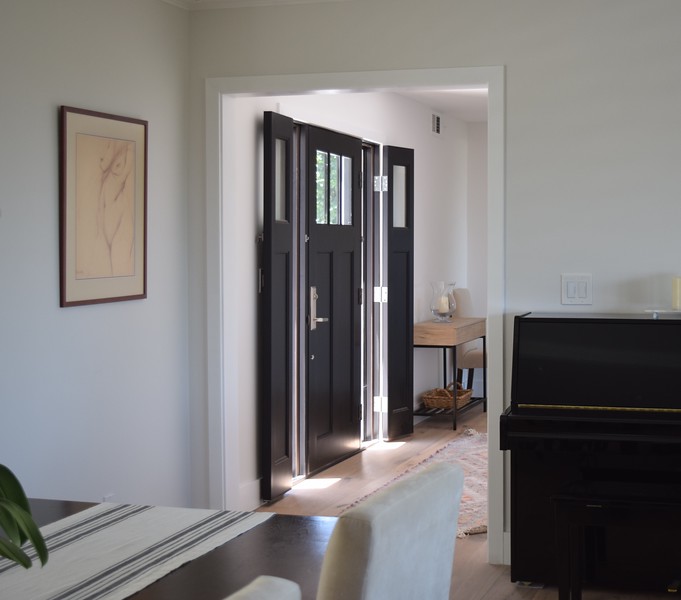 What of the space formerly ruled by Lady with Urn you ask?  In the fullness of time she’ll be replaced by a mirror.  Something about reflecting ambient light or words to that effect.  I honestly wasn’t paying attention but I’m sure it’ll be great. 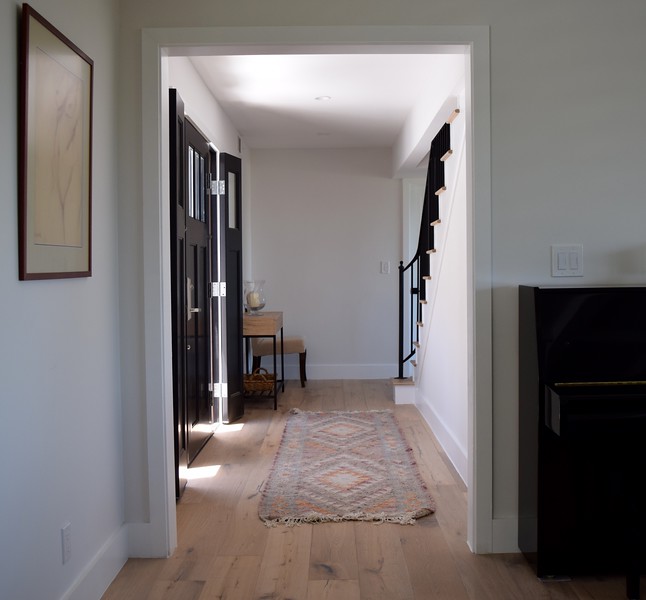 Finally, at long last, the makeover montage. . . Flip or Flop-style (minus the high-profile divorce and tabloid headlines, of course).

Stay tuned.  In a couple of weeks we’ll reveal the smallest room in the house with the greatest number of fixtures I’m not allowed to use . . . the Powder Room!

2 thoughts on “Walk (in) this way: Entryway reveal”